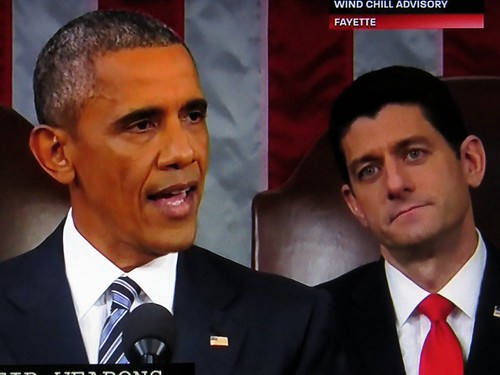 About ten years ago, I read somewhere that the primary developmental task of middle age is to learn to accept and live with paradox. You love someone, even though they do the same stupid things over and over. You accept that you are a person who cultivates compassion — and also has a really mean, sarcastic streak.

And so on. Perfection is, in almost all cases, unattainable.

This seemed like useful information, and I took it to heart.

One of the paradoxes I try to live with is that politicians often aspire to great things — while also propping up the horrors of American Empire. We use drones to assassinate people without due process, killing many innocent civilians in the process. We permit huge corporations to poison the world, and to enslave us in so many ways, I can’t keep count. The insanity goes far beyond anything we can fix through the ballot box.

The most we can realistically expect is that they will make some positive improvements around the edges. That’s how our political system works. We don’t have kings, or dictators. Our politicians propose things, and the other party gets immediately to work to obstruct it. (I guess politics really is a lot like football.)

For eight years, I’ve watched Barack Obama work the edges. Some things were good, some things were only a small improvement. Obamacare was a historic win — which, in its present form, still really sucks and needs radical improvement. (And some, like the TPP, or his continued covert attempts to cut Social Security, were infuriating.)

Last night, he talked about his frustration with the extreme rancor and unwillingness to work together that marked his administration. He called to our higher angels. He politely but firmly pointed out that the Republicans lie about almost everything.

And he went after the toxic speech of Donald Trump. (As did Nikki Haley, in her rebuttal.) In other times, that might have appealed to the moderate middle, but I don’t know if we have enough of those left to matter.

He called for an all-out effort to cure cancer. (It seems to me we already know how to cure cancer. Get the toxins out of our food, air, and water, legalize medical marijuana and the research into its effects on tumors — and control the pharmaceutical industry. We already fund most of their research into the amazing new cures that manipulate viral DNA, but few of us expect to be able to afford those treatments ourselves. Curing cancer isn’t enough.)

Under the circumstances, Barack Obama did the very best he could for the nation, and the world. No sane person can say he didn’t.

And finally, he asked a very important question: “Will we respond to the changes of our time with fear, turning inward as a nation, and turning against each other as a people?”

Watching Speaker Paul Ryan chew gum, roll his eyes, and smirk like a teenager in the background did not give me much confidence in a possible change.

We’ll have to see how that goes.

3 thoughts on “The last State of the Union”