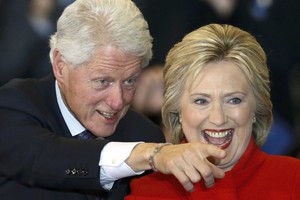 Melissa McEwan hits this out of the park:

At The Daily Banter, Chez Pazienza wrote about the caricature we have come to regard as the authentic Hillary Clinton:

Hillary Clinton’s reputation is largely the result of a quarter century of visceral GOP hatred.

With the exception of maybe Barack Obama, whom they’ve irrationally loathed with the fire of a thousands suns, it’s tough to name anyone conservatives have more vigorously derided throughout the years than Hillary Clinton.

…[Hillary] has always been cast as an arrogant bitch, a soulless bête noire, an irredeemably corrupt and fundamentally dishonest political hustler. From the very beginning of her time in the national political limelight, she was vilified for refusing to simply sit back and be an ornament on the White House Christmas tree, as she was apparently supposed to.

…She’s a lying liar and a cheating cheat. She’s a political Cthulu who drives men to madness by sheer force of her inhuman will and absolute malevolence. This is the caricature version of Hillary Clinton the right has carefully cultivated and hammered into the national consciousness for decades now. And if you’re a liberal who believes these things about Clinton — if you see her as anything other than a liberal Democrat who’s guilty of nothing more than being a politician with faults and with a plethora of enemies like every other on this planet, including Bernie Sanders — you’ve proven that the protracted smear campaign against this woman has worked. You prove that the GOP won a long time ago.

There are reasons you may choose not to vote for Hillary Clinton in 2016, but one would hope they’re policy issues rather than problems with her personality — because the “personality” that’s been sold to the American electorate is largely manufactured, and not by Clinton herself (another facet of the smear: that she’s a phony). The reality is that Clinton was one of the most liberal members of the Senate during her time there, ranking within ten points of progressive messiah Bernie Sanders and her history as a crusader for progressive causes is precisely what so motivated the GOP to destroy her in the first place.

This decades-long, relentless campaign to create a supervillain, led by the GOP and abetted by the media, is so insidious and ubiquitous that we don’t even see it. We are merely left, at best, with a vague sense that there’s something about Hillary Clinton we just can’t trust.

The bitterest irony is that actually seeing Hillary Clinton, watching her in a live interview or a debate, where she isn’t so easily turned into a funhouse mirror image of herself through selective editing and suggestive voiceover, can be jarring to people primed to expect to see The Monster.

And they reach for the explanation with which the villanizers have preemptively provided them: She’s a fake. She can’t be trusted. She’s a cynical opportunist.

If you tune in with expectations of The Monster, and instead find a reasonably pleasant politician who is advocating policy more progressive than you’d anticipated, the ready-made resolution for this shocking discordance is that it’s evidence of Hillary’s cunning villainy.

That must be the explanation. Because the alternative, that Clinton has been demonized so thoroughly with heinous misogyny that her authentic humanity is truly unrecognizable, is unfathomably cruel.

6 thoughts on “Expectations of the monster”