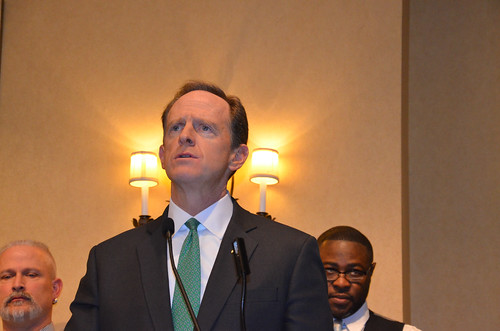 Pat Toomey is my Republican senator, the one I confronted about Republican obstructionism after the Amtrak crash:

Two new polls revealed that incumbent Republican senators in New Hampshire and Wisconsin have joined vulnerable GOP incumbents in Ohio and Pennsylvania, who could lose their seats because of the Republican decision to block Obama’s SCOTUS nominee….

Earlier this week, PPP polls of Pennsylvania and Ohio found that Republican incumbents Pat Toomey (PA) and Rob Portman (OH) are in jeopardy of losing their seats due to the decision by Senate Majority Leaders Mitch McConnell to obstruct President Obama’s Supreme Court nominee.

Democrats need to capture five Republican seats to retake control of the Senate, and thanks to the Republican decision to obstruct and Obama’s nominee before he or she has been chosen, Democrats have the inside track on four seats. It might not matter who Republicans nominate for president.

The Senate is slipping away from Republicans because the bill for years of obstructing President Obama may be coming due this November.