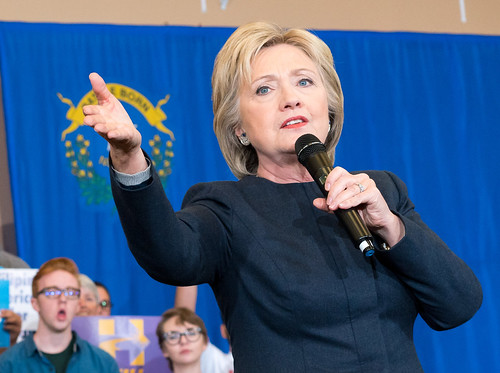 There you go. From Politifact:

Clinton used to be the senator from New York, the home of Wall Street. She has a history of campaign backing from the finance industry and of delivering high-priced speeches to finance firms, such as Goldman Sachs. And her husband, former President Bill Clinton, signed the repeal of a bank break-up bill, the Glass-Steagall Act — a deregulation that some critics believe contributed to the financial crisis.

So we questioned Hillary Clinton’s record of addressing financial regulations. Did she address derivatives, subprime mortgages and financial oversight so early in the crisis?

[…] Clinton said she “called for addressing risks of derivatives, cracking down on subprime mortgages and improving financial oversight” early on in the financial crisis.

The crisis hit a peak in summer 2008, though it started to gain traction in 2007. Clinton began addressing the subprime mortgage issue in her appearances in March 2007. Later that year, she took on derivatives. She also proposed specific plans for solving these problems and increasing oversight of financial institutions.

Her statement is accurate, and we rate her claim True.