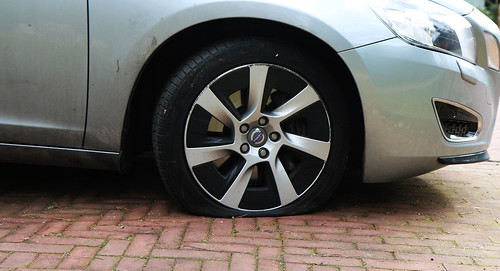 As you may remember, I am wary of flat tires. I hate being stuck somewhere with a flat or, worse, a blowout. So maybe six weeks ago, I went to the garage around the corner to have someone look at a rear tire that looked low; I was taking a long road trip the next day. It was pretty cold out, and I could tell the mechanic didn’t want to take the tire off, but he examined it as best he could while it was still on the car and said he didn’t see anything. He filled it and advised me to keep an eye on it.

So this Monday morning, that same tire was dead flat. There was just enough air left for me to drive it to the garage, which I did. Then I walked home.

A few hours later, the garage owner called me back and said there was nothing wrong with the tire. I walked back to the garage and drove home. Of course, by yesterday morning, it was flat again.

So I called AAA, and they sent someone out to put on the spare. He was a chatty guy, and after he took off the tire, he pointed and said, “See that?” Not one, but two nails in my tire. Nails no one else ever spotted.

The neighborhood garage is terrible; I only go there when I need something simple (like fixing a flat tire). Now they can’t even do that right.

6 thoughts on “You dream flat tires”