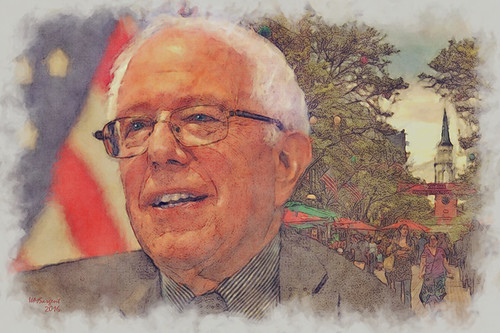 Republicans would much rather face Bernie. That’s why they haven’t attacked him:

“Republicans are being nice to Bernie Sanders because we like the thought of running against a socialist. But if he were to win the nomination the knives would come out for Bernie pretty quick,” said Ryan Williams, a former spokesman for 2012 GOP nominee Mitt Romney’s campaign. “There’s no mystery what the attack on him would be. Bernie Sanders is literally a card carrying socialist who honeymooned in the Soviet Union. There’d be hundreds of millions of dollars in Republican ads showing hammers and sickles and Soviet Union flags in front of Bernie Sanders.”

“Hillary Clinton is a much more centrist candidate in comparison,” Williams said, and she would have a better chance of winning over moderate and undecided voters, despite numerous polls showing that many Americans, even in the Democratic Party, don’t view her as honest and trustworthy. “Bernie’s numbers are better than hers right now because she’s been in the political arena for 30 years getting beat up,” he said.

3 thoughts on “Of course they want to run against him”