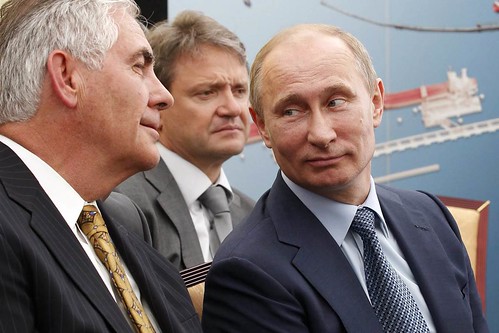 This is the craziest election ever, isn’t it?

Two senior officials with direct access to the information say new intelligence shows that Putin personally directed how hacked material from Democrats was leaked and otherwise used. The intelligence came from diplomatic sources and spies working for U.S. allies, the officials said.

Putin’s objectives were multifaceted, a high-level intelligence source told NBC News. What began as a “vendetta” against Hillary Clinton morphed into an effort to show corruption in American politics and to “split off key American allies by creating the image that [other countries] couldn’t depend on the U.S. to be a credible global leader anymore,” the official said.

[…] Now the U.S has solid information tying Putin to the operation, the intelligence officials say. Their use of the term “high confidence” implies that the intelligence is nearly incontrovertible.

“It is most certainly consistent with the Putin that I have watched and used to work with when I was an ambassador and in the government,” said Michael McFaul, who was ambassador to Russia from 2012 to 2014.

4 thoughts on “U.S. officials: Putin was involved in the election hack”