I spoke to a veteran communications professional who has been trying to place prominent voices supportive of the Afghanistan withdrawal on television and in print.

They told me it has been next to impossible.https://t.co/mBQy5AnCuq pic.twitter.com/iuhQ1qXDiJ This is the craziest election ever, isn’t it?

Two senior officials with direct access to the information say new intelligence shows that Putin personally directed how hacked material from Democrats was leaked and otherwise used. The intelligence came from diplomatic sources and spies working for U.S. allies, the officials said.

Putin’s objectives were multifaceted, a high-level intelligence source told NBC News. What began as a “vendetta” against Hillary Clinton morphed into an effort to show corruption in American politics and to “split off key American allies by creating the image that [other countries] couldn’t depend on the U.S. to be a credible global leader anymore,” the official said.

[…] Now the U.S has solid information tying Putin to the operation, the intelligence officials say. Their use of the term “high confidence” implies that the intelligence is nearly incontrovertible.

“It is most certainly consistent with the Putin that I have watched and used to work with when I was an ambassador and in the government,” said Michael McFaul, who was ambassador to Russia from 2012 to 2014.

I had thought for months as the crisis dragged on, this degree of disinformation cannot possibly hold. From the Nuland tape onward, too much of the underwear was visible as the trousers fell down, so to say. And now we have State and the media clerks with their pants bunched up at their ankles.

The Foreign Affairs piece is by a scholar at the University of Chicago named John Mearsheimer, whose publishing credits include “Why Leaders Lie: The Truth About Lying in International Politics” and “The Israel Lobby and American Foreign Policy,” the latter an especially gutsy undertaking. He is a soothsayer, and you find these people among the scholars every once in a while, believe it or not.

Mearsheimer was writing opinion in the Times with heads such as “Getting Ukraine Wrong” as far back as March, when the news pages were already busy doing so. In the Foreign Affairs piece, he vigorously attacks NATO expansion, citing George Kennan in his later years, when Dr. Containment was objecting strenuously to the post-Soviet push eastward and the overall perversion of his thinking by neoliberal know-nothings-read-nothings. Here is a little Mearsheimer:

… The United States and its European allies share most of the responsibility for the crisis. The taproot of the trouble is NATO enlargement, the central element of a larger strategy to move Ukraine out of Russia’s orbit and integrate it into the West. At the same time, the EU’s expansion eastward and the West’s backing of the pro-democracy movement in Ukraine—beginning with the Orange Revolution in 2004—were critical elements, too. Since the mid-1990s, Russian leaders have adamantly opposed NATO enlargement, and in recent years, they have made it clear that they would not stand by while their strategically important neighbor turned into a Western bastion. For Putin, the illegal overthrow of Ukraine’s democratically elected and pro-Russian president—which he rightly labeled a “coup”—coup—was was the final straw. He responded by taking Crimea, a peninsula he feared would host a NATO naval base, and working to destabilize Ukraine until it abandoned its efforts to join the West.

Drinks for Mearsheimer, for his plain-English use of “coup” alone, any time the professor may happen into my tiny Connecticut village. It is an extensive, thorough piece and worth the read even if Foreign Affairs is not your usual habit. His conclusion now that Ukraine is in pieces, its economy wrecked and its social fabric in shreds:

The United States and its European allies now face a choice on Ukraine. They can continue their current policy, which will exacerbate hostilities with Russia and devastate Ukraine in the process — a scenario in which everyone would come out a loser. Or they can switch gears and work to create a prosperous but neutral Ukraine, one that does not threaten Russia and allows the West to repair its relations with Moscow. With that approach, all sides would win.

Mearsheimer has as much chance of seeing this shift in policy as Kissinger has finding honesty and insight anywhere in Washington. One hope he is busy in other matters.

Sure, why doesn’t everyone start their own spy agency? What could possibly go wrong?

The mysterious workings of a Pentagon office that oversees clandestine operations are unraveling in federal court, where a criminal investigation has exposed a secret weapons program entwined with allegations of a sweetheart contract, fake badges and trails of destroyed evidence.

Capping an investigation that began almost two years ago, separate trials are scheduled this month in U.S. District Court in Alexandria, Va., for a civilian Navy intelligence official and a hot-rod auto mechanic from California who prosecutors allege conspired to manufacture an untraceable batch of automatic-rifle silencers.

The exact purpose of the silencers remains hazy, but court filings and pretrial testimony suggest they were part of a top-secret operation that would help arm guerrillas or commandos overseas.

The silencers — 349 of them — were ordered by a little-known Navy intelligence office at the Pentagon known as the Directorate for Plans, Policy, Oversight and Integration, according to charging documents. The directorate is composed of fewer than 10 civilian employees, most of them retired military personnel.

Court records filed by prosecutors allege that the Navy paid the auto mechanic — the brother of the directorate’s boss — $1.6 million for the silencers, even though they cost only $10,000 in parts and labor to manufacture.

Much of the documentation in the investigation has been filed under seal on national security grounds. According to the records that have been made public, the crux of the case is whether the silencers were properly purchased for an authorized secret mission or were assembled for a rogue operation.

A former senior Navy official familiar with the investigation described directorate officials as “wanna-be spook-cops.” Speaking on the condition of anonymity because the case is still unfolding, he added, “I know it sounds goofy, but it was like they were building their own mini law enforcement and intelligence agency.” 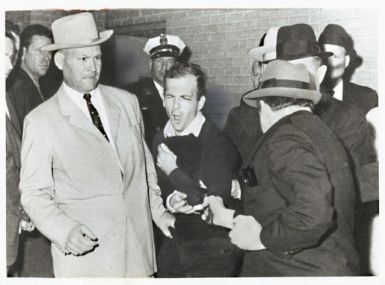 I really don’t think there’s any question that something’s screwy with the JFK assassination. Why are so many of the documents still classified? Anyway, here’s another purported piece of the puzzle:

A former Cuban exile anti-Castro militant told a conference audience Sept. 26 in a blockbuster revelation that he saw accused presidential assassin Lee Harvey Oswald with their mutual CIA handler six weeks before the killing and there would have been no anti-Castro movement in Cuba without the CIA funding.

Antonio Veciana, the acknowledged leader of the Alpha 66 assassination squad of Cuban exiles in the early 1960s, made the statements in a dignified but emotion-laden manner at this year’s major conference analyzing the Warren Commission report on murder of President John F. Kennedy Nov. 22, 1963 in Dallas. Alpha 66 is alleged to have tried to kill Cuban leader Fidel Castro on two occasions, but Veciana, a onetime certified public accountant for a wealthy Cuban in the years before the revolution, has never been been charged with an attempt.

David Atlee Phillips. Separately, the general counsel of the last major government investigation into the killing issued a statement saying the CIA had deceived him and the rest of the public during the late 1970s inquiry into the validity of the Warren report. Former House Select Committee on Assassinations (HSCA) General Counsel G. Robert Blakey issued the statement during the conference Sept. 26-28 organized at the Bethesda Hyatt Regency Hotel in Bethesda, MD by the Assassination Archives and Research Center (AARC).

Veciana said he is convinced the CIA organized the president’s murder and that he saw Oswald meeting with a CIA official in Dallas because Veciana arrived at his meeting fifteen minutes too early. Veciana said he believes Oswald was a CIA operative whom the agency decided to blame for a killing it organized in a complex plot.

Deja vu all over again! My, I’d forgotten how supportive the Very Serious People get when it’s time for another war. I wonder how enthusiastic they would be if it was their children on the front lines. Sis boom bah! How long until they put on their American flag pins again?

Secretary of State John Kerry made the round of Sunday shows this morning to condemn Russia’s “incredible act of aggression” in Ukraine, warning Prime Minister Vladimir Putin that the country faces harsh economic sanctions from the international community.

“It is really a stunning, willful choice by President Putin to invade another country,” Kerry said on Face the Nation.

But in the seriousness of the situation, the irony of Kerry’s next comments may have gone missed. ”You just don’t in the 21st century behave in 19th century fashion by invading another country on completely trumped up pretext,” he said.

He went on to repeat the assertion on Meet the Press, keeping a straight face as he told host David Gregory: ”You just don’t invade another country on phony pretext in order to assert your interests.”

I’m still trying to figure out exactly what the U.S. is up to in the Ukraine. We’ve been funneling millions to the Ukraine opposition for a while, and we’ve selected the new prime minister. Also, late last year, the IMF demanded that Ukraine double prices for gas and electricity to industry and homes, that they lift a ban on private sale of Ukraine’s rich agriculture lands, make a major overhaul of their economic holdings, devalue the currency, slash state funds for school children and the elderly to “balance the budget.” In return Ukraine would get a paltry $4 billion.
END_OF_DOCUMENT_TOKEN_TO_BE_REPLACED