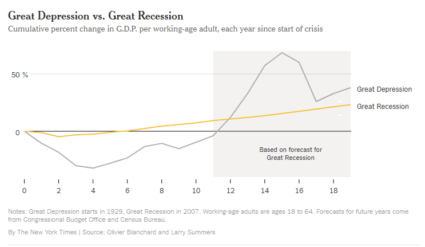 This economy has never really gotten back to normal:

By 2019, a prime measure of the economy’s health — gross domestic product per working-age adult — will likely have recovered less in the 12 years since the crisis began than it did during the 12 years since the start of the Great Depression. When I saw a chart making this point, in a new paper from Olivier Blanchard and Larry Summers, I was stunned. The chart is reproduced above.

Gross domestic product, or G.D.P., measures the nation’s total output, which largely determines its standard of living. And the decline in output during the Depression was clearly much worse than in recent years, as you can see from the gray line. But the economy eventually bounced back, first with rapid growth in the mid-1930s and then during the war mobilization of the early 1940s.

This time, the country never suffered 25 percent unemployment or nearly the same amount of misery — thank goodness — but it has endured years of weak growth following the crisis. You can see this weakness in the relatively flat yellow line.

By 2019, G.D.P. per working-age adult is likely to be only 11 percent higher than when the crisis began (barring an unexpected growth surge or a recession). That’s a miserable growth rate over an extended period. Yes, the economy has done fairly well for last year or two, but not nearly well enough to make up for the long slump, especially because growth was also mediocre in the early 2000s. No wonder so many Americans are angry and frustrated.