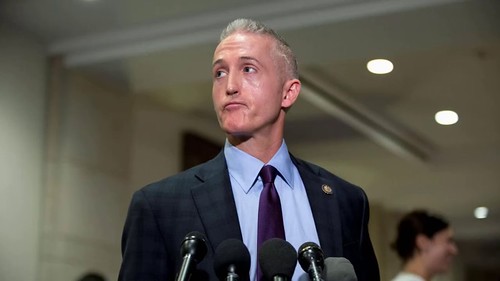 Trey’s so much more honest since he decided not to run for reelection. Plus, any time anyone uses the words “GOP” and “intelligence” in the same sentence, I get the giggles:

Rep. Trey Gowdy (R-SC) said Sunday that he places more faith in federal investigators’ conclusions on Russian election meddling than those of Republicans on the House Intelligence Committee, of which he is a member.

“The President, when he looks at your report, feels vindicated,” CBS’ “Face the Nation” host Margaret Brennan told Gowdy in an interview. “Are you saying he should not?”

“I want to be careful how I phrase this,” Gowdy responded. “No report— The best we can do is say what we’ve learned.”

“I can’t say what’s in the universe of witnesses we have not talked to,” he continued. “And I have always maintained I am awaiting the Mueller investigation. They get to use a grand jury. They have investigative tools that we don’t have.”

“Executive branch investigations are just better than congressional ones. So we found no evidence of collusion. Whether or not it exists or not, I can’t speak to, because I haven’t interviewed the full panoply of witnesses.”

Republicans on the Intelligence Committee released a heavily redacted report on Friday clearing Trump of accusations that his campaign conspired with Russia during the 2016 election. Democrats on the committee released a counter-report and have long claimed that their GOP colleagues did not sufficiently pursue relevant questions and witnesses.

One thought on “Trey Gowdy dismisses the GOP intelligence report”