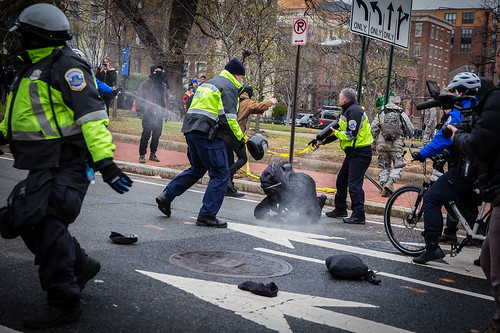 Why would they even prosecute these people?

Jurors found another defendant, Seth Cadman, not guilty on eight separate charges of malicious destruction of property. Cadman stood hand in hand with his two co-defendants, the trio giving each other little squeezes each time the foreperson answered “not guilty” to the judge’s reading off of charges.

But the panel was deadlocked on a ninth charge, “engaging in a riot,” after several days of deliberations. Judge Kimberly Knowles declared a mistrial on that ninth charge, which prosecutors may still pursue if they choose later this summer.

Wednesday’s defeat is a more significant setback for the prosecution than prior acquittals. This trio of defendants are the first who the government said it could prove individually broke windows or scrapped with police on the day. The jury did not believe the government’s evidence that Cadman had struck out in anger on January 20, 2017.

One thought on “Free speech wins”