“There’s no illusion about the storm that’s coming,” said Representative Tom Cole, Republican of Oklahoma, invoking last month’s governor’s races and last week’s Senate special election. “If you had any doubts, they were wiped away after New Jersey, Virginia and Alabama.”

From Texas to Illinois, Kansas to Kentucky, there are Republican-held seats filled with college-educated, affluent voters who appear to be abandoning their usually conservative leanings and newly invigorated Democrats, some of them nonwhite, who are eager to use the midterms to take out their anger on Mr. Trump. […]

Beyond the biggest blue states, perhaps two dozen red-hued districts with significant suburban populations could be winnable for Democrats in a banner year, including those held by Representatives Jaime Herrera Beutler and Dave Reichert of Washington State; Ted Budd and Robert Pittenger of North Carolina; and Kevin Yoder of Kansas.

So of course they are determined to grab everything they can on the way out the door, because FREEDOM! 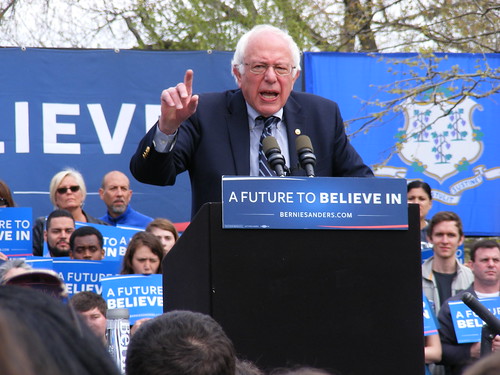 Irate Berne Sanders supporters did not just leave threatening voicemails and texts for state Democratic Party Chairwoman Roberta Lange but also launched an assault on the businesses she oversees, the owner says.

Tom Gallagher, the former Caesars CEO and congressional candidate, said that his son’s tavern, the Porchlight Grille, began receiving threats shortly after the convention ended in chaos Saturday. Lange is the day operations manager there.

“Beginning about 3am on Sunday morning our bartenders at Porchlight Grille began getting non-stop phone threats from Bernie partisans,” Gallagher told me via email. “The level of threats including death threats and vitriol was astonishing. One of our bartenders was actually a Bernie supporter and was stunned at the threats he was hearing on the phone. He began to respond telling people that he was just trying to do his job and pay off his student loans and their tactics were harming his livelihood. It made no difference to the callers. Their goal was to harass and as became clear….to shut down the business and Roberta’s job with it.”

Gallagher said the calls continued during the day Sunday until the eatery disconnected the phone.

“At one point on Sunday before we unplugged the phones, I took a turn at answering and experienced such a nasty call that a Metro officer who happened to be in the tavern as a customer picked up the call and attempted to encourage the woman to stop, explaining that what she was doing was unlawful harassment,” Gallagher told me. “It made no difference. She actually responded that it was her right of free speech.”

And then the social media assault commenced.

From Gallagher: “The Porchlight website and Facebook page were similarly attacked with threats, including by someone who set up a fake ‘Roberta Lange’ ID on Facebook and then posted on the Porchlight Facebook page incredibly slanderous attacks against both Roberta and her husband Ken, including a post by the so-called ‘Roberta Lange’ that accused her husband Ken of crimes against children!”

Also, a Nevada delegate gives his version of events.

Leonard Pitts Jr.’s column was headlined “Democrats need to stand up to tea party.” I couldn’t agree more, but the semi-apologetic tone of his piece left me wondering what Pitts meant by “stand up…”