NEW: @Maddow obtained secret audio of Devin Nunes speaking at an event for Cathy McMorris Rogers, where he admits there is still an active (secret) effort to impeach Deputy AG Rod Rosenstein, & that House Republicans plan to revive it after the Senate confirms Trump's SCOTUS pick

I’m sure you are shocked and saddened to learn that Devin Nunes was lying all along about the Carter Page FISA application:

The FISA on Carter Page began *after* he left the campaign. Is POTUS admitting that Page continued to have contacts with campaign and transition team, which yielded foreign intelligence on Russia's activities that provided basis for subsequent renewals? Giving a lot away, buddy pic.twitter.com/yaddJtpBS7

REMEMBER: Any POTUS has complete declassification & release authority over all IC information. If the Page FISA app is so terribly unjust, and its facts are therefore exculpatory for Team Trump, the WH will no doubt show it to the public to clear this up. Very soon.

.@DevinNunes lied in the Nunes memo and now he's lying about the Carter Page FISA docs to cover up his lies in the Nunes memo — but yea, it's totally the media/Dems going on wild rants. DESPERATE DEVIN IS DEFINITELY NOT NERVOUS OR ANYTHING GUYS. https://t.co/56NbOrhkst

The only thing the newly released FISA documents show is that Republicans have been lying for months https://t.co/r32QscvUKX pic.twitter.com/hHnYNeABS9 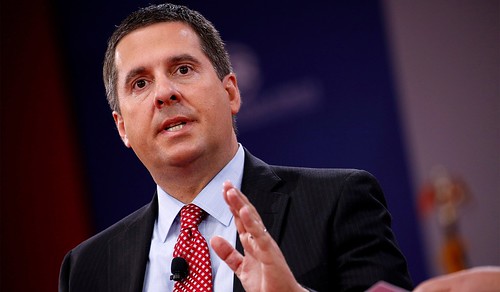 Devin Nunes seems a tad paranoid about Stephen Colbert’s recent trip to Capitol Hill. In an appearance with Fox News host Neil Cavuto on Saturday, Nunes had no patience for Colbert’s brand of humor. “This is the danger that we have in this country,” Nunes said. “The left controls not only the universities in this country,… END_OF_DOCUMENT_TOKEN_TO_BE_REPLACED 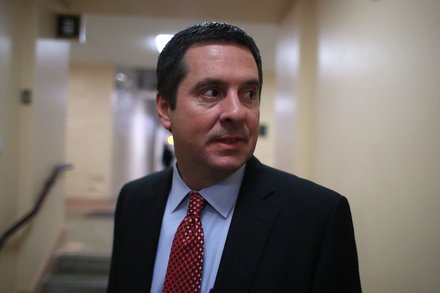 In the letter, which was obtained by Fox News, Nunes claims the bureau violated the Domestic Investigations and Operations Guide by obtaining warrants for Page on the alleged base of an unverified dossier that purports as evidence of ties between Donald Trump and the Kremlin and other Russian individuals.

The letter to Sessions takes the allegations outline in the House Intelligence Committee memo declassified by the president in January that laid the basis for the claim that the FBI used the so-called “golden showers dossier” to obtain Foreign Intelligence Surveillance Act warrants against Page. Page, however, had been under FISA surveillance since 2014, when the FBI became suspicious of his ties to Russian entities.

Sessions on Tuesday announced an internal investigation into the claim that anti-Trump bias is widespread within the Justice Department. On Wednesday, Trump called his AG “disgraceful” on Twitter for not investigating President Barack Obama, only to be rebuked by Sessions, who said he and the DOJ would “continue to do its work in a fair and impartial manner according to the law and the Constitution.”

In a sign of increasing partisan hostilities, Republicans on the House Intelligence Committee plan to construct a wall – a physical partition – separating Republican and Democratic staff members in the committee’s secure spaces, according to multiple committee sources. It’s expected to happen this spring.

For now, some Republican committee members deny knowing anything about it, while strongly suggesting the division is the brainchild of the committee’s chairman, Devin Nunes, R-California.

“I’m not part of that decision,” said Rep. Mike Conaway, R-Texas. “You’ve got to talk to Devin. I don’t know what they’re trying to do one way or the other.”

“I swear to God I didn’t know that,” said Rep. Tom Rooney, R-Florida, when asked about the plan. While acknowledging a wall might not be constructive for the committee’s work, he said, “The level of trust and the level of everything down there is – it’s poison. It’s absolute poison down there.”

Rooney said one reason for the tension is an erosion of trust, exacerbated by an ongoing ethics investigation into the “entire Republican staff,” including “the woman up front that answers the phone” for alleged leaks. He later added that the matter was being handled by the Office of Congressional Ethics.

Bipartisanship, he said, “is gone. It’s gone from that committee.”

“We have heard reports that the chairman may seek to erect a ‘wall’ to divide the staff of the intelligence committee on a partisan basis — this would be a terrible mistake,” the committee’s ranking member, Rep. Adam Schiff, D-California, told CBS News. “While we have more than our share of difficulties, the important oversight work of the committee continues with our staff working together irrespective of party. This would be a very destructive decision.”

On CNN, Kate Bolduan interviewed Rep. Mike Quigley, member of the House Intelligence Committee, about why he believes Devin Nunes coordinated with the White House on the controversial FBI memo. “There’s new questions this morning about Nunes and whether there has been any coordination with the White House on this. You’ll recall that he was on… END_OF_DOCUMENT_TOKEN_TO_BE_REPLACED

As more bad news rolls out for Donald Trump and his best friend Vladimir Putin, who should step up to run interference but Rep. Devin Nunes, chairman of the House Select Intelligence Committee, with claims that intelligence was collected on the Trump transition team via “incidental collection.” Incidental collection is the term used for communications intercepted… END_OF_DOCUMENT_TOKEN_TO_BE_REPLACED