I love dishes. I used to have a lot of them, but I had to taper off as I kept moving to smaller places. Now I’m down to two sets (practical tempered glass dishes for everyday and microwave use, a slightly nicer set of casual china), but I still look at them longingly all the time.

I look at dinnerware the way other obsessed people read cookbooks. (Overstock.com is my favorite fix.) I also picture myself entertaining with them, which is pretty silly. No one comes to visit me anymore and when I get together with my friends, it’s always at a restaurant – with someone else’s dishes.

I still remember my first set of stoneware. It was Danish, with brown and orange accents. (Hey, it was the Seventies. Earth tones were everywhere!) Then I got another set of Danish stoneware, but it was deep sky blue with speckles. I remember it had these lovely curved teacups that fit right into my hand. (The ex got them with the divorce. Damn.)

Now my dishes are white, surrounded by a band of primary colors. Because I can’t stand to commit to a single color scheme, you know?

Sometimes I like to dream about having a spacious loft apartment, with those big rolling wire restaurant shelves which of course would be stacked with dishes. When people would come to visit, I’d say casually, “Oh, which dishes should we use?” And they’d say, “It’s so hard to pick, you have so many nice dishes!”

I’d bring out some big handpainted pasta dishes and put a pile of fresh pasta in the middle of the table, family style. I’d have some fabulous hand-blown wine glasses I picked up somewhere “for a song” and we’d all toast.

In that other world, the one where I have all the dishes. 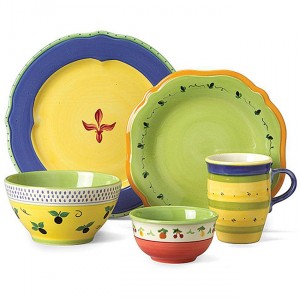 5 thoughts on “Once I Had A Secret Love”