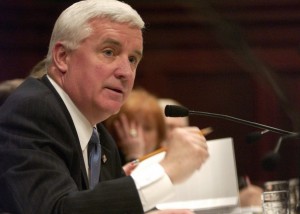 As columnist Steve Lopez would say back when he used to cover our state politics: “Pennsylvania: Land of Giants.” There are few ethics laws in PA, and the ones that exist are toothless. (And we don’t have limits on campaign contributions. Nice, huh?)

Take, for instance, our state Attorney General Tom Corbett, a former lobbyist for Waste Management Inc. He just won the Republican nomination for governor, and guess what’s first on his list?

Sending a subpoena to Twitter to force them to identify two of his critics.

But there’s plenty more nuttiness where that came from. For one thing, he’s steadily refused to resign, saying there was no potential conflict between his investigation of prominent politicians – and his asking their support.

And then there’s the consultant, the one he hired to do “outreach” for the AG’s office. It’s just a coincidence that she was hired to do the same work for his campaign.

What’s a little odd is that he’s using her to send out the exact same kind of mailings for which he’s been indicting other state politicians.

But let’s get back to Waste Management Inc., Tom’s former employer and large contributor. One of the things they do is haul sludge.

Because sludge so often contains toxins, state legislators passed a law that authorizes the state AG to overrule local ordinances that affect farming practices, including the spreading of sludge.

Corbett filed lawsuits against these communities to prevent them from enforcing the ordinances they enacted.

Oh, and did I mention he’s another one of the Republican AGs who is filing a lawsuit to stop the new health care legislation?

He’s using it to raise money for his campaign:

This is from CasablancaPA, one of the bloggers he’s trying to identify:

Remember when Corbett adamantly maintained he should head up the bonusgate investigation even though many of his ostensible targets in the legislature were prominent supporters? (Tribune Review 1/24/08)

Corbett has yet to indict any significant supporter who serves or has served in the state legislature. In fact, he’s completely ignored the Senate Republican Caucus, which awarded the largest bonuses to staff who worked on campaigns.

Although John Perzel eventually was sacrificed for the appearance of nonpartisanship, Perzel’s refusal to support Corbett’s gubernatorial primary campaign, during a private meeting between Perzel, Corbett and Nutt in October of 2007, preceded Perzel’s indictment.

Pennsylvania is a very big state, and with the newspaper business in a nosedive, a lot of papers have been cutting back on statehouse coverage. That’s one of the reasons why Tom Corbett’s been getting away with all this crap.

One thought on “Land of Giants”