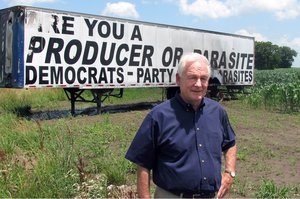 Why Carl Jung is a genius:

The Raytown farmer who posted a sign on a semi-truck trailer accusing Democrats of being the “Party of Parasites” received more than $1 million in federal crop subsidies since 1995.

But David Jungerman says the payouts don’t contradict the sign he put up in a corn field in Bates County along U.S. 71 Highway.

After a story about Jungerman’s trailer ran in Sunday’s Star, however, some readers called him a hypocrite for criticizing others for getting government help while taking government subsidies paid for by taxpayers.

Jungerman said he put up the sign to protest people who pay no taxes, but, “Always have their hand out for whatever the government will give them” in social programs.

Crop subsidies are different, he said. When crop prices dip below a certain point, the federal government makes up the difference with a subsidy payment.

Why, that sounds like a guaranteed profit to me – which is socialism. Which makes Mr. Jungerman not only a parasite, but a victim of his own cognitive dissonance.