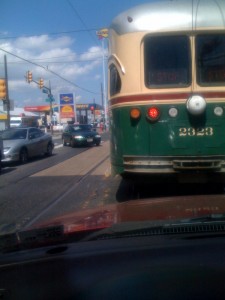 Newcomers always say to me (with a combination of scorn and wonder), “No one ever leaves here.” I correct them: “Some people leave here, but they usually come back.”

There’s a sense of place here you don’t always find in a big city. When people ask you where you went to school, they don’t mean college: They mean grade school. Yeah, it’s tribalism. So what? Is there some magical place where tribalism doesn’t exist?

But one of the things I love most about Philadelphia is that, much like the inhabitants, it isn’t overly impressed with itself. That attitude has made us a major destination for foodies, because you can actually afford to eat in good restaurants here. (Unlike, say, our Amtrak neighbor to the north.) And here, restaurants rise and fall on quality, not concept and hype.

I’ve taken visitors out here and they can’t quite believe that you can have such good food for so little money. “If it’s not good, or if it’s overpriced, Philadelphians won’t go to it,” I explain with a shrug. “We won’t pay extra to, you know, feel good about ourselves for being seen at a certain kind of restaurant. People here just don’t think like that.”

And the streets are filled with such history here. It’s hard to explain that to people who live in places where nothing ever happened, because so much happened here. It’s just that kind of place. A psychic I once interviewed told me, “Philadelphia has a very settled energy. People come here to incubate ideas. We don’t have major disruptions.” I think that’s true. This is a good city in which to chill, kind of like Baltimore on steroids.

Over the past ten years, there’s been a steady influx of New Yorkers into the area: Artists, writers, musicians. Forced out by New York City’s housing costs, a lot of them came here determined to stay just long enough until they could afford to Go Back. But they stayed anyway.

And why not? It’s so seductive here. You get to do a lot of really interesting things with interesting people, and it’s so much more affordable than anywhere else. (Plus, the lifestyle’s a lot less frenetic.) You can buy a warehouse and turn it into painting studios here for what it would cost to buy a one-bedroom condo in Brooklyn – and it’s only a $10 bus ride to Manhattan.

Houses are pretty cheap here. I was looking on Craigslist the other day at a five-bedroom Victorian brownstone — for $189,000. Already fixed up, on a good street in a decent neighborhood near Center City. In New York, you probably couldn’t even buy a studio apartment for that amount.

And Philadelphia has no predetermined image to live up to (other than that guy who puked on the little girl at the Phillies game — but he was from Jersey!). We’re not the center of the universe, like New York, or the seat of power, like D.C. We get to constantly reinvent ourselves, because we can.

I love the lack of pretense. My son was talking to me the other day about why he hates hipsters: “Instead of actually being different, they’ve accepted the marketing concept that simply wearing the right ironic accessories and doing certain things like bowling make them special.

“It’s not that bowling isn’t fun, because it is,” he said. “It’s that they’re not authentically enjoying it, it’s only an ironic statement about people who do. They’re not having real lives, because they’re always mentally off in a corner somewhere, observing themselves. They’re not really here.”

Most of the people here? They’re really here. The rest? Well, they’re from out of town. They’ll figure it out eventually.

8 thoughts on “Why I Love Philadelphia”