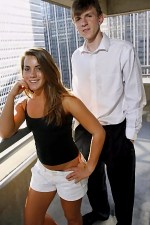 While James O’Keefe may have walked away from his recent criminal charges with a slap on the hand, it’s going to be more difficult to weasel his way out of these lawsuits:

Juan Carlos Vera was one of a number of ACORN employees who in the summer of 2009 was secretly filmed giving advice to O’Keefe and Giles, who told media they were posing as a pimp and prostitute with plans to bring underage prostitutes to the US from Latin America.

In a lawsuit (PDF) filed in a California court this week, Vera argues O’Keefe and Giles broke the law when they taped their conversation inside the ACORN office. California is one of about a dozen states where conversations can only be recorded if all parties to it agree. Vera is seeking $75,000, plus unspecified “special damages.”California Attorney General Jerry Brown cleared Vera of wrongdoing in a report earlier this year. Brown found that, though Vera appeared sympathetic to the “pimp and prostitute” during the taped meeting, he immediately notified the police of the conversation.

Brown’s investigation also found that the O’Keefe videos were “significantly edited.”The shocking prospect of ACORN employees aiding in human trafficking prompted Congress to de-fund the group last year, a move that was later ruled unconstitutional. And a report from the Government Accountability Office, released earlier this year, found no evidence of wrongdoingon the part of ACORN, which received some $40 million in federal funding from 2005 to 2009.

In February, Hannah Giles admitted that the flamboyant pimp and prostitutes costumes in which she and O’Keefe were seen in some of the videos were never worn inside ACORN offices, contrary to most news reports. “In truth, O’Keefe represented himself to low-level ACORN workers as the college law school boyfriend of Giles, desperately trying to save her from the house of an abusive pimp who she believed would kill her,” Brad Blog reported.

Vera’s lawsuit is not the first one to be launched by an ACORN employee over the O’Keefe videos. In January, Pennsylvania ACORN worker Katherine Conway-Russell sued the duo, claiming that they had misrepresented her in the videos.”Unlike the videos [O’Keefe] has been showing on the Internet, we refused to help him and called the police and filed this report,” Conway-Russell said in an ACORN-produced video.