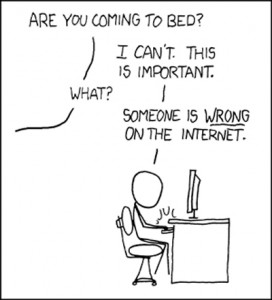 I can’t tell you how strange the past two days have been. (In addition to the flowers, I even got four marriage proposals. I’m mulling them over. The guy with the goats, the one with the cows, or the one with health insurance?) I’ve been reading all the stuff people have written about this unrecognizable me — I even got accused of using a sock puppet (fake user name) to defend myself over at FDL.

People on the intertubes are crazy. (Not you guys, of course. We have this nice quiet little corner of the online universe, although we’ve had a lot of visitors lately.) But generally speaking, there are a lot of intensely crazy people whose every waking moment is dedicated to the proposition that “someone, somewhere on the internet is WRONG, and I must CONFRONT them!!!!”

Geeze. Get a life, willya?

But I do think I need to correct the various media interpretations of The Great Axelrod Event. Let me make clear: I wasn’t being belligerent, it’s not my nature. As I told the White House aide who put the call together, “This is just the way I talk. I’m always like this. I talk loudly, I interrupt. I’m from Southwest Philly, I didn’t go to Yale.”

And I wasn’t being any harder on Axelrod than I’ve been on any public figure. As a reporter, my attitude was always, “Enough of the blah blah blah, let’s get back to my question.” Is that so unusual that it’s worth noting? I guess so. I’m sorry to see that.

I’m also a very literal person. Axelrod was asking us for help, and my reaction was, how do you even expect us to do that when y’all are treating people badly? It wasn’t a sucker punch, it was a logical progression of thought. So no, I’m not some folk hero — unless telling the truth is so unusual now that simply stating the facts is a big deal.

And then I got the “purer than thou” people who are all, like, “Why would you want to help them, you sniveling sellout?” (I guess there’s still hope for me, because I’m not that literal.) Very few situations are completely binary.(i.e. on or off). “Is there some potential gain for my position by a temporary alliance on this particular point?” I’m a negotiator by nature. If you want something from me, here are the ground rules. Then we’ll talk.

Telling Axelrod the White House has to stop punching hippies wasn’t the goal of the negotiation, it was only a ground rule. And I certainly wasn’t buying into the idea that if Congress loses the mid-terms, it’s because the DFHs didn’t clap loud enough.

And while I understand that some of you are resentful that no one else on the call asked that question, come on. Those of you who still have jobs know the drill. Would you confront your CEO at a public event?

Then we have the armchair quarterbacks: “What she SHOULD have done was…..” followed by a long tirade about how I should have righteously listed the wrongs done by the administration. Uh huh. This was a 45-minute call with a senior White House advisor and I got the last five minutes, of course he’s going to hang on the phone and listen to me rip into their record. That would have accomplished a lot, don’t you think?

Whether you understand it or not, I did get Axelrod to think about my point.

The bottom line is, the people criticizing me weren’t the ones on the call. Some people are quite annoyed by that (“Who does SHE think she is? Why was SHE on a White House call? SHE’s a narcissistic blah blah blah….”).

For whatever reason, there I was, doing what I thought was useful. Your mileage may vary.

P.S. Oh, and let’s not even get into the cesspool of online anonymity and the ensuing lack of civility. Certain types of anonymous cowards will always feel free to say online the kinds of things they’d never have the courage to say to someone’s face.

37 thoughts on “Life in the eye of a hurricane”