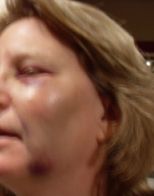 About an uppity woman being attacked by right-wing extremists!

Leah Burton is the author of Palin’s America ~ God, Guns & Greed, which will be released in early 2011. She currently serves on the Board of Directors of the Military Religious Freedom Foundation fighting Christian Dominionism in the U.S. armed forces:

I found out what it felt like to be the victim of the less skinhead version of curbing…right after I left a gathering where I had shared openly how dangerous Sarah Palin is because of her extreme religious world view. I had passed out my card to several who asked which had “TheoPalinism: The Face of Failed Extremism” on it along with “This is our WAKE UP CALL!”

Unlike Ms. Valle, there were no cameras to capture what the cowards did to me…the evidence of my attack was clearly in the damage to my face, and the looks of shock and horror by my companions who were ahead of me on the crowded dark sidewalk. No, these people are cowards who travel in packs, just like dogs. They are tough and mighty then. They lack the ability to discuss their issues, they are angry and the only way they feel that they can calm their anger is to do harm to the perceived enemy.

What happened in Alaska less than 2 weeks ago to reporter Tony Hopfinger when he was cuffed by militia/security goons hired by Tea Party candidate Joe Miller who thinks he is so important that he even requires protection…is not unrelated to this mentality of use of force to push back against anyone who disagrees with them.

This is a frightening trend and I don’t seeing it stopping. I can’t even count the number of death threats I have received in the 2 years that I have actively worked to preserve the separation of church & state and expose the bible-based cult of Christian Dominionists. And I cannot tell you how many of these self-identified “Christian Patriots” (their label – not mine), after threatening to do me harm, quote from the Bible to me and sign off that they are praying for me.

[…] After an MRI and examination it was determined that I was very lucky. I suffer to this day (nearly 2 years later) from constant pain in my left cheekbone…but, as my doctor said, the force from the impact and then the compression from the boot on my head could easily have resulted in pressure popping my eye out and a shattering of my cheekbone requiring a metal plate and surgery. So yes, I am lucky…in a sick and twisted way.

Unfortunately, I was attacked by cowards who ran after blurting out a profane remark that I will not repeat here, but it was their way of letting me know that this was no accident.

2 thoughts on “Another day, another story…”