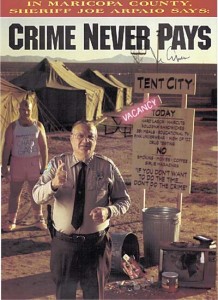 Gee, who would believe that something like this would happen in the great bigoted state of Arizona?

Maricopa County officials believe the discovery of a duplicate payroll log and database hidden in a secure computer system at the Sheriff’s Office could reveal the extent of alleged misspending in Sheriff Joe Arpaio’s agency.

The sheriff’s employee database operated parallel to a county-run system, recording a different set of sheriff’s staff assignments and payments than official records provided to county auditors. County officials say the system has existed since the early part of the decade, but they learned of it only recently through paperwork produced in a case alleging racial profiling against the Sheriff’s Office.

Details of the sheriff’s employee database and steps taken to investigate will be outlined to county supervisors at a hearing this morning.

The supervisors plan to subpoena 20 to 30 people to testify in the future about the hidden database, which is housed in a computer system at the center of a costly legal battle between Arpaio and the supervisors.

County administrators believe the Sheriff’s Office intentionally misappropriated as much as $80 million designated for jail operations over five years to pay employees working in patrol, human-smuggling operations and investigative units. Those employees should have been paid with other funds, but county officials suspect the Sheriff’s Office tried to maintain staffing levels by using money that legally was inaccessible.

The voter-approved jail-detention funds were established more than a decade ago with a sales tax of one-fifth cent per dollar to build and operate jail facilities.

If proven, the misappropriation of funds could lead to criminal charges. County Manager David Smith has called for an investigation by various agencies led by the U.S. Department of Justice.