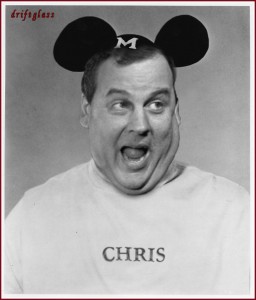 UPDATE: Turns out the lt. governor was in Mexico because her father is dying. Gee, you think Christie could have postponed his trip?

For someone who’s so very arrogant toward teachers and government workers for what he thinks are their shortcomings (remember when he told a teacher if the job was so tough, get another one?), NJ Gov. Chris Christie sure believes in minimal effort for himself. Knowing a major storm was bearing down on his state, he did what any Republican politician would do: He took his family to Disney World!

After all, why be in New Jersey during a crisis when you can simply phone it in? I guess he knew he could relax, knowing a Democrat was in charge!

New Jersey is buried after an epic snowstorm. And Gov. Chris Christie is … at Disneyworld.

Critics are blasting the Republican governor’s decision to remain on his Sunshine State vacation while New Jersey residents grapple with the aftermath of a devastating blizzard.

Guadagno is the state’s first lieutenant governor. She was in Mexico when the blizzard hit.

Christie left for vacation on Sunday — the same day Sweeney declared a state of emergency in New Jersey — with his wife and four children. He is expected to return on Thursday.

Calls and e-mails to Christie’s office were not immediately returned.

The governor’s spokeswoman, Maria Comella, told Politico that “snow in the northeast happens often,” and that the response to the snow is being handled by the acting governor, secretary of transportation, state police and the governor’s staff. “And like every other day, the governor was and continues to be in regular contact with his staff and cabinet officers,” she added.

Compare and contrast Christie’s haughty indifference to the eager-beaver style of Newark’s Democratic mayor Cory Booker, who’s been using his Twitter account to identify trouble spots and has been out shoveling since the storm, catching only a few hours’ sleep in three days. Even Time magazine noticed:

If you’re a mayor of a northeastern U.S. city, you probably despise Cory Booker right now, because the tweeting mayor of Newark, N.J., is now a social-media superhero, able to move towering snowbanks in a single push — or by sending the shovels and plows your way. 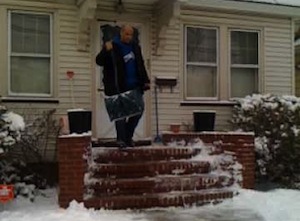 After a blizzard started blanketing the Northeast on Dec. 26, an event that earned the Twitter hashtag #snowpocalypse, Booker turned the microblogging site into a public-service tool. Residents of the city, which has a population of around 280,000, swarmed Booker’s account (@CoryBooker) with requests for help, and the mayor responded. He and his staff have bounced around Newark shoveling streets and sending plows to areas where residents said they were still snowed in.

“Just doug [sic] a car out on Springfield Ave and broke the cardinal rule: ‘Lift with your Knees!!’ I think I left part of my back back there,” he reported in one message. One person let Booker know, via Twitter, that the snowy streets were preventing his sister from buying diapers. About an hour later, Booker was at the sister’s door, diapers in hand.

By the way, it didn’t take a blizzard. Booker regularly checks in with constituent requests via Twitter — and he doesn’t berate them, either!

My best friend lives in Monmouth County and she says it’s a real nightmare, with seven-foot drifts through her neighborhood. She said cars and buses are still stranded everywhere, even on the major highways:

State Transportation Commissioner Jim Simpson said the storm was so intense that civilians were deputized on the spot as traffic monitors Sunday night. They helped state officials manage traffic and prevent 300 stranded cars on a steep upgrade of Interstate 280 in Essex County from becoming 3,000 stranded cars, he said. Shelters were provided, and drivers were asked if they wanted to leave their cars.

NJ Transit had trains running on Monday and bus service restored by midnight that night. “If you take a look at the state in totality, we did a really good job,” Simpson said.

He said factors ranging from spinouts to icing to whiteouts to sheer bad luck had ramps blocked throughout Route 18 in Monmouth County. “We had like nine or 10 plows that were stuck on 18,” Simpson said. “All of this happened because of this horrific, perfect storm.”

In Neptune Township in Monmouth County, many streets remained unplowed today, forcing emergency workers to trek through 3 feet of snow to reach residents asking for help out of their homes to go to doctors’ appointments or pharmacies.

Cars are still stranded on the Garden State Parkway after the Dec. 26th blizzard.

2 thoughts on “The tough guy phones it in”