Yes, the moneychangers are back! And by the way, Mike Fitzpatrick isn’t a “freshman” — he was the incumbent Bucks County PA congressman who was ousted by Patrick Murphy, and then beat him again in the mid-terms. So no, this isn’t a little mistake made by a newbie:

News broke today that two House members, Rep. Pete Sessions (R-Texas) and freshman Rep. Mike Fitzpatrick (R-Pa.), may not have actually been properly sworn in to the House yesterday. They were at the Capitol Visitors Center–and just holding up your right hand while watching it on TV may not do the trick. That’s still being debated.

More importantly, though, is why they missed the swearing in to begin with. As Ryan Grim at the Huffington Post reports, they weren’t able to take their oath live from the House floor because they were holding a fundraiser in the Capitol while others were being sworn in. Seriously. This could, according to the Committee on Standards and Ethics, very well be unethical and maybe even illegal.

Rep. Mike Fitzpatrick (Pa.) was attending a celebration in the Capitol Visitor Center with supporters that his campaign bused in from Pennsylvania. A spokesman for Fitzpatrick said the event, titled “Fitzpatrick’s Swearing-in Celebration,” was not a fundraiser and that no contributions were collected.

“There was a bus available for people that wanted to ride it down,” spokesman Darren Smith said.

Fitzpatrick’s campaign website listed a $30 fee for transportation costs for the swearing-in festivities. In addition, more than 200 people who did not ride the buses attended the event for free, according to Smith.

Oh, okay! Big misunderstanding, right? Even though a screenshot of his webpage (which has since been taken down) offers check boxes for larger “donations” and included the line: “Please note that your donation will appear on your credit card statement as “Campaign Financial Svcs.”

Welcome back, Republican thieves and liars. We kind of missed you! 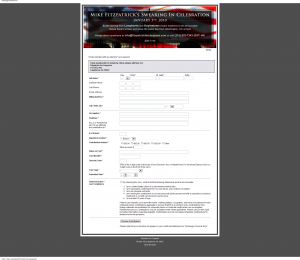 3 thoughts on “Open for business”