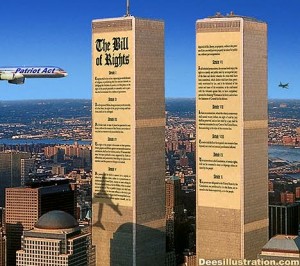 Via Raw Story, this unappetizing news that the Patriot Act is likely to be renewed for yet another year:

Rep. Mike Rogers (R-MI) has introduced a little-noticed bill that intends to once again renew controversial provisions of the Bush administration’s USA Patriot Act that are due to expire this year.

When the act was first signed into law, Congress put in some “sunset” provisions to quiet the concerns of civil libertarians, but they were ignored by successive extensions. Unfortunately, those concerns proved to be well founded, and a 2008 Justice Department report confirmed that the FBI regularly abused their ability to obtain personal records of Americans without a warrant.

The only real sign of strong opposition to the act was in 2005, when a Democratic threat to filibuster its first renewal was overcome by Senate Republicans.

Since the bill introduced by Rogers on Jan. 5 was virtually identical to the extension passed last year, its passage was seen as likely.

“Given the very limited number of days Congress has in session before the current deadline, and the fact that the bill’s Republican sponsor is only seeking another year, I think it’s safe to read this as signaling an agreement across the aisle to put the issue off yet again,” the conservative-leaning Cato Institute’s Julian Sanchez wrote.

“In the absence of a major scandal, though, it’s hard to see why we should expect the incentives facing legislators to be vastly different a year from now,” he added. “I’d love to be proven wrong, but I suspect this is how reining in the growth of the surveillance state becomes an item perpetually on next year’s agenda.”

As senator, Obama promised to support reforming the Patriot Act, but voted in favor of extending it in 2005 and 2008. Similarly, he signed last year’s extension into law with little fanfare. FBI and Department of Justice officials had consistently argued that restricting their blanket authority to conduct warrantless searches would harm national security.

Candidate Obama said in 2007 that if he were elected president there would be “no more National Security Letters [NSL’s] to spy on citizens who are not suspected of a crime” because “that is not who we are, and it is not what is necessary to defeat the terrorists.”

Much like Obama’s vow to close the Guantanamo Bay military prison, the use of NSL’s has also continued. Most recently, Obama’s Department of Justice sent an NSL to micro-blogging site Twitter, seeking information on all 635,561 users who followed secrets outlet WikiLeaks — a list that included Raw Story.

Obama’s campaign website insisted that he has consistently said he would support a Patriot Act extension that strengthens civil liberties.

Action on his campaign pledge had yet to emerge by the start of 2011, and no significant reforms were reflected in the newly Rep. Rogers’ extension.