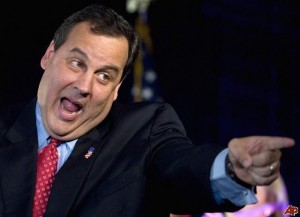 And no, he’s not talking about a salad bar!
Don’t you just love this? We’re in the middle of a depression and Chris Christie is begging Congress not to send his state more money. (Because it wouldn’t give him the excuse he needs to break the unions and steal their pensions, and it won’t help the Republicans destroy Medicaid):

Gov. Christie on Sunday urged Republicans in Congress not to “paper over” the problems facing deficit-racked U.S. states with an additional round of stimulus spending.

Christie, a Republican entering his second year in office, said in an interview on Fox News Sunday that he had asked federal lawmakers not to approve additional money. Christie said states must cope with the expiration next year of funding under the 2009 American Reinvestment and Recovery Act.

Christie’s comments come as 40 states have projected deficits that may reach $140 billion in the 2012 fiscal year, according to a December report from the Washington-based Center on Budget and Policy Priorities. President Obama’s stimulus bill contained $140 billion to help states cope with the recession.

Christie has warned of cuts to New Jersey’s Medicaid program as it faces a $1.4 billion deficit because of the loss of $900 million from the federal government and the requirement to maintain services at levels mandated by the United States.

The state’s nonpartisan Office of Legislative Services projected Christie may face a deficit of $10.5 billion for the fiscal year beginning July 1, equivalent to more than a third of the current budget. Christie last year closed a $10.7 billion gap in part by skipping a $3 billion pension payment and cutting $1.3 billion in aid to schools and cities.