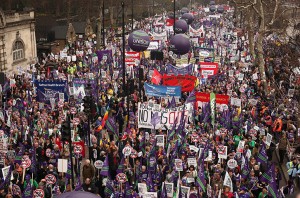 Courage is contagious, and nothing shows it like the growing numbers of people joining in the UKUncut demonstrations against government austerity. (USUncut held rallies Saturday across the country.) Sign up for your closest group, get involved in local actions:

Around 400,000 people (Ed. note: The Guardian has updated the headline to 500,000) have joined a march in London to oppose the coalition government’s spending cuts.

In what looks like being the largest mass protest since the anti-Iraq war march in 2003, teachers, nurses, midwives, NHS, council and other public sector workers were joined by students, pensioners and direct action supporters, bringing the centre of the capital to a standstill.

Tens of thousands of people streamed along Embankment and past police barriers in Whitehall. Feeder marches, including a protest by students which set off from the University of London in Bloomsbury, swelled the crowd, which stretched back as far as St Paul’s Cathedral.

The biggest union-organised event for over 20 years saw more than 800 coaches and dozens of trains hired to bring people to London, with many unable to make the journey to the capital because of the massive demand for transport.

“I’m sure that many of our critics will try to write us off today as a minority, vested interest,” said Brendan Barber, the general secretary of the Trades Union Congress, which organised the march.

“The thousands coming to London from across the country will be speaking for their communities when they call for a plan B that saves vital services, gets the jobless back to work and tackles the deficit through growth and fair tax.”

Got that? A plan that “saves vital services, gets the jobless back to work and tackles the deficit through growth and fair tax.” Learn it, love it, live it! Stand up for your rights.