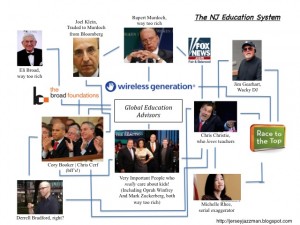 New Jersey’s answer to Arnold Schwarzenegger is taking the first steps toward enriching his friends and benefactors by privatizing public schools:

The public-private partnership would authorize school management organizations to operate five schools, and would target some of the 100,000 New Jersey students now enrolled in 200 chronically failing schools, the governor’s office said.

The state’s teachers union, which has clashed with the Republican governor over cuts to school aid and other issues, said the plan was part of Christie’s “ongoing effort to privatize public education in New Jersey.”

Oh yeah, Christopher Cerf! Look at the chart at the top of this post and see if you can follow with this post from Blue Jersey:

Klein is the former boss of Christopher Cerf, currently Acting Commissioner of Education under Chris Christie. Cerf’s last edu-business venture before accepting the position was as founder of Global Education Advisors, which “consulted” with the Newark schools on a plan to vastly increase the numbers of charter schools in the city.

The $500,000 for the report came from the Broad Foundation, funded by billionaire Eli Broad. The foundation also funded Cerf’s training as an education administrator.

Yes, for some odd reason, Cory Booker, Newark’s mayor, refused to disclose who funded the study.

Cerf contributed to the campaign of Newark’s Mayor, Cory Booker, who has been intimately and illegally involved in the “reform” of Newark’s schools. Cerf was most recently seen at Booker’s State of the City address. Booker is also working closely with Chris Christie and their good buddy, billionaire Mark Zuckerberg, who freely admits he is “investing” in Booker.

Charter schools in NJ are also being heavily promoted by Derrell “The Freman” Bradford. Bradford was recently appointed to an “Educator Effectiveness Task Force” by the Christie Administration, despite his embarrassing lack of education experience or credentials. That task force issued a report that flew directly in the face of all serious research on teacher evaluations.