On SportsCenter last night, ESPN ran a segment on collisions at home plate. Runners attempting to score routinely crash into catchers blocking the plate in an attempt to separate them from the ball.

Why are the catcher and the plate dealt with differently than any other position and base? A runner who barrels into an infielder trying to turn a double play would be called out for interference (and so would the runner behind him). Imagine a would-be base stealer lowering his shoulder and crashing into the fielder. Should that be allowed? What if runners legging out infield grounders routinely tackled first basemen? What if a runner could shove a pitcher covering first base on a ground ball to the right side? What if every instance of opposing players coming into close proximity of one another carried the potential for violent collisions?

The biggest clue that something needs to be done about this is that MLB “commissioner” Bud Selig says that no rule change is necessary. Of course, he didn’t think anything needed to be done about steroids until the game became a joke and its records meaningless. The pride the Selig now takes in the league’s banned-substance policy ignores how the league was dragged — slowly — against its will to where it is today.

Remember the criticism (rightly) leveled against Alex Rodriguez for slapping the ball out of Bronson Arroyo’s glove in the 2004 ALCS? A-Rod was called out on the play. For interference.

So, to review, this is interference. 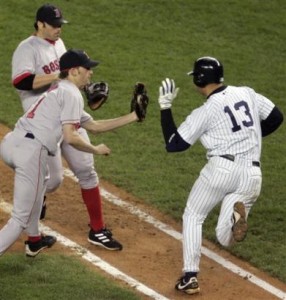 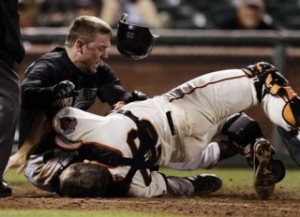 I understand the additional significance of home plate compared to other bases: safe = a run. But an out at any other base prevents a potential run. I don’t think one base or position should be treated differently than others. If you can’t crash into one infielder to prevent him from making a play, you shouldn’t be allowed to crash into any of them. It’s one thing to reward interference with a safe call at first, second or third. It’s another to reward it with a run.

The argument that “fans enjoy it,” even if I accepted it (which I don’t. Fans enjoy a play at the plate because of what’s at stake — a run — not because of the potential for a violent crash and injury), wouldn’t justify turning a blind eye to the practice. Hey, some baseball fans like when a batter charges the mound. Does that mean the league should allow it?

What it boils down to is consistency. The catcher is a fielder covering a base and should be afforded the same protections as other fielders.

And I don’t begrudge the catcher his gear. The gear protects him from 95 mph fastballs and foul balls. Ask Buster Posey, pictured above, how well the gear protects catchers from charging baserunners.

View all posts by Dr. S.