I volunteer at the local domestic abuse shelter. They used to have a thriving garden program going, with a kid’s program to start the seeds, and some sort of greenhouse. It fell by the wayside because the woman who was running it from the UW Extension office lost her funding for it. I started last year, cleaning up the raised beds they had (the shelter is on the site of an old foundry – the yard is fell of slag) and weeding what got planted.

This year, the advocate who is running a self-sufficiency program for clients decided that the garden should be enlarged. ENLARGED. So a bunch of people showed up including boys from a youth intercept program and some people from a local church, and dug up across the yard, probably 25 x 50, and a three foot strip along one edge, and back behind the rhubarb, and planted flowers in the beds by the house, and planted a bunch of tomatoes – and then left.

So, all the weedish stuff got tilled into the dirt, and here I am, weeding. Which was okay for a while, because when it was cooler I had a chance against the weeds. But a lot of what I planted washed out in the bad storms we had, and there was a big hole where the bunnies could get in to eat all except for ONE bean plant out of two packets, and all but Eight out of a big packet of peas, and one type of corn barely germinated and the other only got about 50%. And then it got hot, and I stayed in the basement for a week. Or was it ten days?

Did I mention I’m pretty much the only one weeding? I was feeling pretty defeated.

So, I got out there yesterday. Those tomatoes we were going to mercy kill three weeks ago? Setting fruit. Lots of fruit. The squash that we were going to replace? Ten foot vines. The corn? Up and going, and grew inches from yesterday till today. Lettuce? Harvested a big salad’s worth today. And the raggedy raspberries and blackberries that I whacked back by 2/3′s last fall? 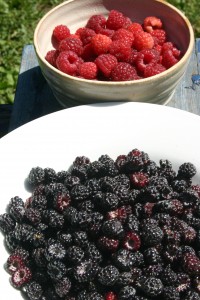 It always amazes me that you can just stick some poor spindly thing in scratchy rocky clayey soil, and it still gets up to grow.

5 thoughts on “In the garden.”