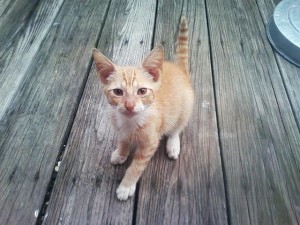 My son Sam just went back to his mom’s place for the rest of the summer, after spending two three-week stints down here. It was a successful visit in so many ways: he had an excellent time, he was introduced to New York City, he got to have a mohawk, and he FINALLY learned to love cats, making friends with my two furry friends Henry and Elvis.

I live in a pretty poor area of the city, and one area in which we are plagued is the multitude of feral cats. The task of catching and neutering every fertile female and male on the block is beyond my means (especially the females, which require a week to heal), so instead I keep an eye out for kittens and younger cats that can be (or are already) socialized. I’ve adopted out about three this way.

One of the more adventurous kittens showed up on my back porch during Sam’s visit, an orange tabby mix who’s clearly related to my Elvis, but with much shorter hair. I called my kid to the door. “Hey Sam, new kitty!” As the boy approached the screen I asked him, “What do you think we should call him?”

Sam took one look at the kitty and laughed. “His name is ‘Small-y’,” he said. And so he is.

Over the past two weeks, Smally’s learned to eat out of my hand, sits on my leg, and is getting more and more socialized every day.

And you know what?

Smally needs a home. If you live in Philly, let’s get in touch. I am happy to split the cost of his shots with you (at the Girard Animal Hospital, it’s only like $60.00). he won’t need to be neutered for another few months, and I’ll help with that too.

7 thoughts on “PSA for Kitty Lovers”