From the descriptions of the people who were there, it sounds as though Mayor Bloomberg’s strategy is to thin the ranks of protesters with police set-ups like this. They probably don’t understand how many more people are waiting in line to support the Occupy Wall Street actions:

Police reopened the Brooklyn Bridge on Saturday evening after more than 500 anti-Wall Street protesters were arrested for blocking traffic lanes and attempting an unauthorized march across the span.

The arrests took place when a large group of marchers, participating in a second week of protests by the Occupy Wall Street movement, broke off from others on the bridge’s pedestrian walkway and headed across the Brooklyn-bound lanes.

“More than 500 were arrested on the Brooklyn Bridge late this afternoon after multiple warnings by police were given to protesters to stay on the pedestrian walkway,” a police spokesman said.

“Some complied and took the walkway without being arrested. Others locked arms and proceeded on the Brooklyn-bound vehicular roadway and were arrested,” he added.

The bridge was reopened at 8:05 p.m. EDT after being closed for hours.

Witnesses described a chaotic scene on the famous suspension bridge as a sea of police officers surrounded the protesters using orange mesh netting.

Some protesters tried to get away as officers started handcuffing members of the group. Dozens of protesters were seen handcuffed and sitting on the span as three buses were called in to take them away, witnesses and organizers said.

The NY Times interviewed protesters who said, despite NYPD claims, the police never warned them they couldn’t walk in the roadway:

“The cops watched and did nothing, indeed, seemed to guide us onto the roadway,” said Jesse A. Myerson, a media coordinator for Occupy Wall Street who was in the march but was not arrested.

[…] Etan Ben-Ami, 56, a psychotherapist from Brooklyn who was up on the walkway, said that the police seemed to make a conscious decision to allow the protesters to claim the road. “They weren’t pushed back,” he said. “It seemed that they moved at the same time.”

Mr. Ben-Ami said he left the walkway and joined the crowd on the road. “It seemed completely permitted,” he said. “There wasn’t a single policeman saying ‘don’t do this’.”

He added: “We thought they were escorting us because they wanted us to be safe.” He left the bridge when he saw officers unrolling the nets as they prepared to make arrests. Many others who had been on the roadway were allowed to walk back down to Manhattan. 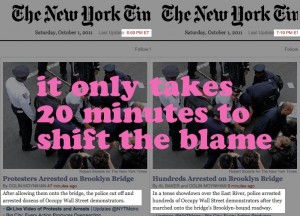 4 thoughts on “Setup on the Brooklyn Bridge”