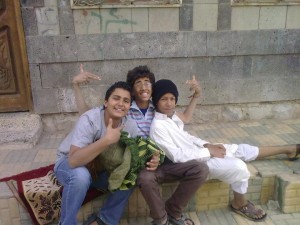 Abdulrahman Awlaki is the kid in the middle.

Two weeks after the U.S. killed American citizen Anwar Awlaki with a drone strike in Yemen — far from any battlefield and with no due process — it did the same to his 16-year-old son, Abdulrahman al-Awlaki, ending the teenager’s life on Friday along with his 17-year-old cousin and seven other people. News reports, based on government sources, originally claimed that Awlaki’s son was 21 years old and an Al Qaeda fighter (needless to say, as Terrorist often means: “anyone killed by the U.S.”), but a birth certificate published by The Washington Post proved that he was born only 16 years ago in Denver. As The New Yorker‘s Amy Davidson wrote: “Looking at his birth certificate, one wonders what those assertions say either about the the quality of the government’s evidence — or the honesty of its claims — and about our own capacity for self-deception.” The boy’s grandfather said that he and his cousin were at a barbecue and preparing to eat when the U.S. attacked them by air and ended their lives. There are two points worth making about this:

1) It is unknown whether the U.S. targeted the teenager or whether he was merely “collateral damage.” The reason that’s unknown is because the Obama administration refuses to tell us. Said the Post: “The officials would not discuss the attack in any detail, including who the target was.” So here we have yet again one of the most consequential acts a government can take — killing one of its own citizens, in this case a teenage boy — and the government refuses even to talk about what it did, why it did it, what its justification is, what evidence it possesses, or what principles it has embraced in general for such actions. Indeed, it refuses even to admit it did this, since it refuses even to admit that it has a drone program at all and that it is engaged in military action in Yemen. It’s just all shrouded in total secrecy.

Of course, the same thing happened with the killing of Awlaki himself. The Executive Branch decided it has the authority to target U.S. citizens for death without due process, but told nobody (until it was leaked) andrefuses to identify the principles that guide these decisions. It then concluded in a secret legal memo that Awlaki specifically could be killed, but refuses to disclose what it ruled or in which principles this ruling was grounded. And although the Obama administration repeatedly accused Awlaki of having an “operational role” in Terrorist plots, it has — as Davidson put it — “so far kept the evidence for that to itself.”

2 thoughts on “Sins of the father”