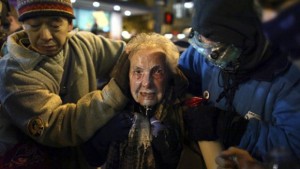 (AP) SEATTLE – A downtown march and rally in support of the Occupy Wall Street movement turned briefly chaotic as police scattered a crowd of rowdy protesters — including a pregnant 19-year-old and an 84-year-old activist — with blasts of pepper spray.
Protest organizers denounced the use of force, saying that police indiscriminately sprayed the chemical irritant at peaceful protesters.

The Occupy Seattle movement released a written statement late Tuesday expressing support for “a 4-foot 10-inch, 84-year-old woman, a priest and a pregnant woman who as of this writing is still in the hospital.”

2 thoughts on “They’ve all come to look for America”