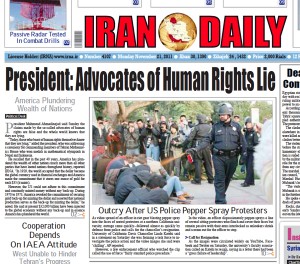 Via Gawker (h/t Noz), this story about how authorities are using the U.S. as a role model for handling protesters. Yes, the whole world is watching (see the front page of the Iran Daily):

Two people were killed in Cairo and Alexandria this weekend as Egyptian activists took the streets to protest the military’s attempts to maintain its grip on power. And guess how the state is justifying its deadly crackdown.”We saw the firm stance the US took against OWS people & the German govt against green protesters to secure the state,” an Egyptian state television anchor said yesterday (as translated by the indispensable Sultan Sooud al Qassemi; bold ours).

Yeah—it gets harder and harder to maintain a moral high ground when videos like this andpictures like this are unavoidable. But American police haven’t killed anyone!

4 thoughts on “The whole world is watching”