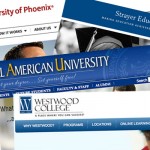 I was so disappointed that the administration caved on this. I guess because no one the Villagers know would have children attending a for-profit school, so it wasn’t all that important to them. Most people can’t imagine just how cynical these places are. I know – I was an “admissions counselor” (aka sales rep) for one of the biggest names. They wanted me to sign up anyone with a pulse, and I refused to do it. It was the longest six months of my life.

WASHINGTON — Last year, the Obama administration vowed to stop for-profit colleges from luring students with false promises. In an opening volley that shook the $30 billion industry, officials proposed new restrictions to cut off the huge flow of federal aid to unfit programs.

But after a ferocious response that administration officials called one of the most intense they had seen, the Education Department produced a much-weakened final plan that almost certainly will have far less impact as it goes into effect next year.

The story of how the for-profit colleges survived the threat of a major federal crackdown offers a case study in Washington power brokering. Rattled by the administration’s tough talk, the colleges spent more than $16 million on an all-star list of prominent figures, particularly Democrats with close ties to the White House, to plot strategy, mend their battered image and plead their case.

Anita Dunn, a close friend of President Obama and his former White House communications director, worked with Kaplan University, one of the embattled school networks. Jamie Rubin, a major fund-raising bundler for the president’s re-election campaign, met with administration officials about ATI, a college network based in Dallas, in which Mr. Rubin’s private-equity firm has a stake.

And politically well-connected investors, including Donald E. Graham, chief executive of the Washington Post Company, which owns Kaplan, and John Sperling, founder of the University of Phoenix and a longtime friend of the House minority leader, Nancy Pelosi, made impassioned appeals.

In all, industry advocates met more than two dozen times with White House and Education Department officials, including senior officials like Education Secretary Arne Duncan, records show, even as Mr. Obama has vowed to reduce the “outsize” influence of lobbyists and special interests in Washington.

The result was a plan, completed in June, that imposes new regulations on for-profit schools to ensure they adequately train their students for work, but does so on a much less ambitious scale than the administration first intended, relaxing the initial standards for determining which schools would be stripped of federal financing.

2 thoughts on “Liars and thieves”