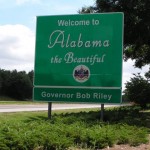 This is simply horrifying. And you’ll notice the real culprits:

The facility, which has been under construction since 1996, was meant to cost about $300m.

But the bill soared to $3.1bn after construction problems and a series of bond and derivatives deals that went sour in the financial meltdown of 2008.

Investment bank JP Morgan Securities and two of its former directors have been fined for offering bribes to Jefferson County workers and politicians to win business financing the sewer upgrade.

Six of Jefferson County’s former commissioners have been found guilty of corruption for accepting the bribes, along with 15 other officials.