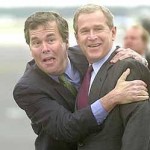 I wonder who’s behind this? Via Cannonfire, some very intriguing news:

Someone has paid for a poll designed to see if there is any enthusiasm for a Jeb Bush run against Barack Obama in 2012.

After all, it would be too late for Bush to enter the race, right? Everyone has been told that the field is set. And indeed, in several primary states qualifying has closed. But New Hampshire allows voters to write-in any name they choose. And most party caucuses either don’t have a ballot or have a pretty open write-in policy. Don’t forget, Henry Cabot Lodge, Jr. won a surprise write-in victory in New Hampshire without ever declaring himself a candidate for President in 1964.

There is still time. In fact, if Jeb was interested in seeking the party’s nomination, this might be his smoothest path to victory.

I can see why some in the GOP leadership might be intrigued by this idea. The base simply does not care for Romney. Newt probably can’t win in the general. Ron Paul is a sincere libertarian — no TARP for him, thank you — and thus will never be allowed to get near the nomination.

The Bush name appeals to the Tea Party cranks and to the Establishment — in other words, to the third of the country who remained stalwart Dubya supporters to the very end. However, I don’t think the name has much appeal to anyone outside that 33 percent.

Jeb’s spokesperson has denied that he has anything to do with the poll. However, there was a Florida poll in April matching Obama against Jeb Bush. Bush won handily, and even attracted a surprising amount of Democratic support.