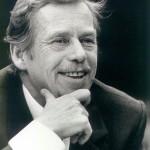 I haven’t had many heroes in my life, but Vaclav Havel was one of them. He was a great artist, musician and playwright who had a soaring intellect (he named Frank Zappa as a cultural advisor), remarkable courage and the determination to speak the truth – for which he was jailed, and then later became the first president of the new Czech Republic.

His insights in recent years are just as inspiring and relevant today as they were in 1977. Read his work in light of the Occupy movement:

After Charter 77 [see Wikipedia entry here], Western journalists kept telling us: you are just a small group of intellectuals fighting with one another, the workers are not behind you, you are not supported by millions of people and are just banging your heads against a brick wall. And I used to respond that in a totalitarian system we can never tell what is hidden under the surface because it can’t be verified.

We didn’t have opinion polls or free media but we knew something was brewing in the social subconscious. I sensed with greater and greater intensity that sooner or later something would explode, that things could not go on like this for ever, because you could see how everything was bursting at the seams. It was obvious that a random event could provoke great changes. And the whole thing would snowball and turn into an avalanche.

I also used to say that under a totalitarian regime sometimes a single voice – such as Solzhenitsyn’s – can have greater weight than those of millions of voters. And that we cannot predict when this snowball will turn into an avalanche. I didn’t know either and I, too, was surprised that it happened when it did. But of course, it was linked to the general crisis of the system – ecological and social – and also to its cowardly nature. After all, they had every instrument of power at their disposal and they could have instigated some sort of a confrontation to defeat us. But they had no energy left.

His essay, “The Power of the Powerless,” uses the analogy of a greengrocer who suddenly refuses to put an approved poster in his shop window, illustrating the revolutionary power of not only refusing the societal lie, but speaking the truth in what he called the “post-totalitarian” system:

Let us now imagine that one day something in our greengrocer snaps and he stops putting up the slogans merely to ingratiate himself. He stops voting in elections he knows are a farce. He begins to say what he really thinks at political meetings. And he even finds the strength in himself to express solidarity with those whom his conscience commands him to support. In this revolt the greengrocer steps out of living within the lie. He rejects the ritual and breaks the rules of the game. He discovers once more his suppressed identity and dignity. He gives his freedom a concrete significance. His revolt is an attempt to live within the truth. . . .

The bill is not long in coming. He will be relieved of his post as manager of the shop and transferred to the warehouse. His pay will be reduced. His hopes for a holiday in Bulgaria will evaporate. His children’s access to higher education will be threatened. His superiors will harass him and his fellow workers will wonder about him. Most of those who apply these sanctions, however, will not do so from any authentic inner conviction but simply under pressure from conditions, the same conditions that once pressured the greengrocer to display the official slogans. They will persecute the greengrocer either because it is expected of them, or to demonstrate their loyalty, or simply as part of the general panorama, to which belongs an awareness that this is how situations of this sort are dealt with, that this, in fact, is how things are always done, particularly if one is not to become suspect oneself. The executors, therefore, behave essentially like everyone else, to a greater or lesser degree: as components of the post-totalitarian system, as agents of its automatism, as petty instruments of the social auto-totality.

Thus the power structure, through the agency of those who carry out the sanctions, those anonymous components of the system, will spew the greengrocer from its mouth. The system, through its alienating presence in people, will punish him for his rebellion. It must do so because the logic of its automatism and self-defense dictate it. The greengrocer has not committed a simple, individual offense, isolated in its own uniqueness, but something incomparably more serious. By breaking the rules of the game, he has disrupted the game as such. He has exposed it as a mere game. He has shattered the world of appearances, the fundamental pillar of the system. He has upset the power structure by tearing apart what holds it together. He has demonstrated that living a lie is living a lie. He has broken through the exalted facade of the system and exposed the real, base foundations of power. He has said that the emperor is naked. And because the emperor is in fact naked, something extremely dangerous has happened: by his action, the greengrocer has addressed the world. He has enabled everyone to peer behind the curtain. He has shown everyone that it is possible to live within the truth. Living within the lie can constitute the system only if it is universal. The principle must embrace and permeate everything. There are no terms whatsoever on which it can co-exist with living within the truth, and therefore everyone who steps out of line denies it in principle and threatens it in its entirety. . . .

The original and most important sphere of activity, one that predetermines all the others, is simply an attempt to create and support the independent life of society as an articulated expression of living within the truth. In other words, serving truth consistently, purposefully, and articulately, and organizing this service. This is only natural, after all: if living within the truth is an elementary starting point for every attempt made by people to oppose the alienating pressure of the system, if it is the only meaningful basis of any independent act of political import, and if, ultimately, it is also the most intrinsic existential source of the “dissident” attitude, then it is difficult to imagine that even manifest “dissent” could have any other basis than the service of truth, the truthful life, and the attempt to make room for the genuine aims of life.

Speak truth. Start there. Refuse the lie, it’s still the most revolutionary act any of us can do.

2 thoughts on “A tribute to Vaclav Havel”