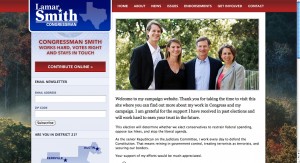 SAN ANTONIO (Reuters) – The lawmaker behind a bill to combat online piracy vowed on Thursday to press ahead in the face of fierce criticism from Internet giants such as Google and Facebook.

“It is amazing to me that the opponents apparently don’t want to protect American consumers and businesses,” Republican Representative Lamar Smith told Reuters in a telephone interview.

The Stop Online Piracy Act, which is before the House of Representatives Judiciary Committee chaired by Smith, aims to fight online piracy of pharmaceuticals, music and other consumer products by allowing the Department of Justice to seek federal court injunctions against foreign-based websites.

Under the bill, if a judge agrees that websites offer material that violates U.S. copyright laws, Internet service providers could be required to block access to foreign sites and U.S. online ad networks could be required to stop ads and search engines barred from directly linking to them.

But not strongly enough to follow them when it’s for his own benefit. Via TechDirt:

Any time you have someone who is vehemently copyright maximalist, it’s really only a matter of time until someone discovers that they, too, violate copyrights. There had been some questions asked a few months ago about whether or not SOPA sponsor Lamar Smith had licenses to put up videos of news reports on his site, but that didn’t seem like a huge deal (and was likely fair use anyway). However, the latest, as a ton of you are sending in, is that some enterprising folks at Vice discovered that Lamar Smith’s campaign site was making use of a photograph in violation of its Creative Commons license.

So they contacted the photographer, DJ Schulte:

“I switched my images from traditional copyright protection to be protected under the Creative Commons license a few years ago, which simply states that they can use my images as long as they attribute the image to me and do not use it for commercial purposes.

“I do not see anywhere on the screen capture that you have provided that the image was attributed to the source (me). So my conclusion would be that Lamar Smith’s organization did improperly use my image.”

Ooops. And this is a big part of the problem that we’re talking about. Thanks to the ridiculousness of today’s copyright laws, it’s pretty much guaranteed that everyone infringes, whether you intend to or not. Which is why we ought to be exceptionally careful about doling out quick and powerful punishment for those involved in infringement. After all, the supporters of these things never know when it might just come back to bite them directly…

Yep. That nice nature scene in the background? ILLEGAL. At least, under SOPA it would be. They could shut down his website for good and convict him of a federal crime. Maybe he should think about that.

One thought on “Copyright for me”