CLINTON: Yes. Potentially it is, and that’s what I’ve been saying from the beginning. I’ve gotten some criticism on some of the more left-wing blogs about it, but the complaining about the abuses of the 1 percent or tenth of a percent of Americans who are in finance, who helped to cause this mess, that’s been very useful, because I’ve been talking about income inequality in America for twenty years, and when I was president, people didn’t pay much attention to it, probably because wages were going up. But I don’t think I’ve given a single solitary speech since I left office that I hadn’t talked about it. It’s a problem around the world and within the United States. So these people have put that on the agenda.

But what I’ve been trying to get them to do is to unite behind just one or two or three simple things that they can be for, and then mobilize people who won’t spend the night outside in November. And the infrastructure bank would be a very good thing to do, because it really would put people to work. If you wanted to create jobs in a way that has minimal effect on the deficit but has government action, the two best things you could do are the infrastructure bank and a simple SBA-like loan guarantee for all building retrofits, where the contractor or the energy-service company guarantees the savings. So that allows the bank to loan money to let a school or a college or a hospital or a museum or a commercial building unencumbered by debt to loan it on terms that are longer, so you can pay it back only from your utility savings. You could create a million jobs doing that because of the home models that are out there now. 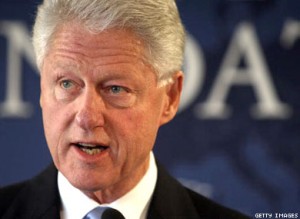 There are these two guys on Long Island who started a little home-repair deal. They got thirty-five employees now, and they’re — they can go in, tell you how much they’ll save you. There’s an operation in Nebraska that’s in and out in a day, and they’re averaging more than 20 percent savings, and conservative Republican Nebraska is the only state in the country that has 100 percent publicly owned power. They’re all owned by municipalities, so the cities will just, you know, add the bill, and so if we’re all living there, we have three choices: We can just pay for the stuff right away and the bill goes down 20, 22 percent, or we can tell ’em, We’re gonna pay it off as quick as we can, but we can’t afford anything else, so you just take it out of our savings every month. That’s normally a year and a half. Or, if you want to take three years, you can give some of your savings now and split it with them. And the municipalities do it. [New York governor] Andrew Cuomo just signed a bill that got no coverage, which will basically allow people to do the same thing on their Con Ed bill. It’s called on-bill financing, so that you make a deal with the contractor and whoever’s financing the contractor to pay off your retrofit only through your savings. They estimate that in New York alone, they can create ten to twelve thousand jobs immediately doing this. This is the kind of thing we can be doing all over America, at low tax-dollar investment, to put a lot of people to work right away.

One of the problems is that a lot of people in your profession, particularly people who have to do the daily news and cover the politics all the time, they’re so sensitive about being branded too far to the left that everything’s a little bit of this, a little bit of that, and all the while, you know, these guys just keep moving farther to the right. But I still believe John Boehner has good sense, and he’s got a pretty good feel for America, you know, all that time he spent in his daddy’s bar, he’s got a pretty good feel for where Joe Six-Pack is, and I think that is important.

I also think that having all these businesspeople in Alabama recoiling against the extreme immigration law, that’s a very good thing.

One piece of this that I think we need to push harder, we the Democrats, because it’s an open door for the Republicans — prosperity centers. Why has Silicon Valley come back?

Because first of all, the tech bubble bursting was way overstated, you know, “Oh, it’s the end of the world” and all that. Yeah, the stocks were overvalued. From ’97 to ’99, the utilization of various information technologies, particularly telecommunications, increased at 500 percent a year worldwide. Nothing can sustain that. So you have stock, investment levels, premised on 500 percent growth per year — it’s not gonna last. When the so-called collapse occurred which caused the mini-recession in 2001, you know what happened? They went from 500 percent a year to 50 percent a year. Most economic enterprises would kill for 50 percent growth per year. So Silicon Valley comes back strong.

You’ve got Orlando with those one hundred computer-simulation companies. They got into computer simulation because you have the Disney and Universal theme parks, and Electronic Arts’ video-games division. And the Pentagon and NASA desperately need simulation, for different reasons. So there you’ve got the University of Central Florida, the biggest unknown university in America, fifty-six thousand students, changing curriculum, at least once a year, if not more often, to make sure they’re meeting whatever their needs are, and they’re recruiting more and more professors to do this kind of research that will lead to technology transfers to the companies. You’ve got Pittsburgh actually becoming a real hotbed of nanotechnology research. You’ve got San Diego, where there are more Nobel-prize-winning scientists living than any other city in America. You’ve got the University of California San Diego and other schools there training people to do genomic work. Qualcomm is headquartered there, and there are now seven hundred other telecom companies there, and you’ve got a big private foundation investing in this as well as the government, and nobody knows who’s a Republican or who’s a Democrat, they’re just building this networking.

This is the kind of thing that works. I like it when the president goes to Detroit and talks about how we got the auto business back, because if the American people knew the details of that, they would not see it as a bailout; they would see it as a financial reconstruction that saved two million jobs, not just the eighty thousand more we got working in the auto industry but every car dealership, every mechanic in every car dealership, every salesman of the cars, you know, the whole structure of part suppliers, and all that. But that’s what we need more of, things that will work. So then I think the auto restructuring directly led to the next big bipartisan agreement, which was on higher mileage standards for cars, which will create 150,000 jobs in the new technology, because you have the unions, the car ownerships, the foreign car owners, the companies that sell a lot of cars in America, the government, and then the management — everybody’s working together.

I’d like to see the country, instead of being in just a deep funk about all the hideous problems we got — which are manifold — look at these islands of prosperity and see what works.

8 thoughts on “The Esquire interview”