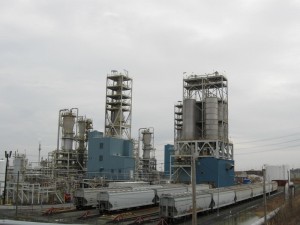 Marcus Hook was one of the towns I covered as a reporter, and now it’s on the edge of losing the one main industry. The Republican governor is largely indifferent to their plight:

“Marcus Hook is a town teetering on the edge of destruction. Last year, Sunoco Oil announced that it would shut down its refinery in Marcus Hook. This refinery has employed residents for generations; it provides a tax base for the community, and directly funds part of the school district. As horrible as it is, I wish this were an isolated event; but Sunoco is also closing its south Philadelphia refinery, and ConocoPhillips is closing one in nearby Trainer, Pa. In total, 2,500 Pennsylvanians will be laid off, and thousands more will see their livelihoods affected as more residents struggle with unemployment and the tax base disappears.

Throughout the last six months, elected officials across the political spectrum have joined together to help find a buyer for these refineries and save the community. There has been one notable exception: Governor Tom Corbett. Our governor has refused to attend important meetings with stakeholders, speak to the press about the issue, or even meet with the workers facing layoffs. We were heading out to Marcus Hook that day to collect letters from the community demanding that the governor help save their jobs.

[…] Everyone I met had the grim sadness I expected. Some were vehement, angry, and ready to act. Some were scared, and quiet; a sense of hopelessness hung about them. Resignation reflected in their eyes as they glanced over their shoulders to the dead end of the street where you can still see the light from the burnoff of the oil refinery, for now.

No one was too busy to write a letter to the governor about this. One after another the heartbreaking stories poured onto the pages. Christine said “Dear Governor Corbett…our families, children, grandchildren, and great grandchildren depend on us to provide for them.” She knew what a lasting impact this time would have on her town. Jay said simply “Dear Governor …I believe you need to stand up.” Theresa started her letter by saying that she is “struggling as it is.” Each face, each voice bracing for the impact of the work that their governor has not done for them.”

One person said he’s had a chance to talk Obama about the issue and he promised to try to help, but he can’t get Corbett to even pretend to respond.