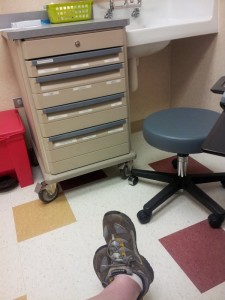 I was so out of it when the alarm went off this morning, I started pulling office clothes out of the closet. It took me a few minutes to realize I wasn’t going to a job interview, but to a doctor’s appointment.

Finally, I met with the endocrinologist. Nice older gent, very sharp and a good communicator. He asked how I found him. I told him he was the senior specialist listed on the hospital website. “I thought you might have found me on Google,” he said. “I wrote a paper on subclinical hypothyroidism, that’s how a lot of people end up here.”

Nope, I told him. For once, I simply lucked out.

I told him I thought I’d been hypothyroid for a long time, but the tests didn’t confirm it. (I’d actually had a couple of tests that did indicate it, but when they were redone, I was normal.) Why did you think you were? he wanted to know. Brain fog, dry skin, low body temperature, I said.

“That’s just a variation,” he said. “Lots of people have a lower temperature.”

“Yeah, but when I get sick, mine goes even lower.”

“When I was sick in February, it was 93.3.” (I remember because it was the same as WMMR-FM, the classic rock station.)

He looked at me, but didn’t say anything.

So he ordered a more extensive set of blood tests but because of the holiday, I probably won’t get the results until next week. He told me it was unlikely that the new test would show much of a difference, but he’d have a better idea of possible causes. I asked (because I’m curious that way) if this had anything to do with why I have such strong reactions to such small doses of medication. He said yes, because I’d metabolize things much more slowly and they would have that effect – interesting, I thought.

Anyway, so we’ll see what happens. He told me to make a followup appointment in six weeks; the next available one was the end of August. Good thing we don’t have socialized medicine, huh?

UPDATE: By the way, blood pressure’s still good – 132/72. Glad I didn’t let the primary doc put me on statins!