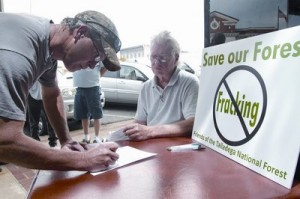 Fracking may be coming to East Alabama in the hills of the Talladega National Forest.

On June 14th the Bureau of Land Management (BLM) will sell leases for approximately 43,000 acres in the Talladega National Forest in eastern Alabama for oil and gas extraction after being approached by an unknown drilling company. Interest in the area appears to be on shale gas in the Black Warrior Shale Basin beneath Talladega National Forest. Some of the wells may use fracking as a method to release gas deposits.

There are quite a few citizens and officials that are very concerned about it. There was meeting at the Ritz Theater in Talladega, AL on Monday this week to discuss these concerns. One was the lack of notification by the BLM. U.S. Congressman Mike Rogers (R- Saks AL) has asked the BLM to delay proceeding with the sale so the public may review the proposals. He had stated that the BLM did not properly notify officials in the area of the proposed sales. Francine Hutchinson, a local biology instructor and naturalist, said she keeps up with news on the Talladega National Forest on line and stated she was unaware of the announcement and the comment period that ended April 19th. Calhoun County Commissioner Tim Hodges who represents the area didn’t even know about the proposed leases until near the end of the comment period.

Rep. Randy Wood, R-Saks, said he was opposed to oil and gas drilling in the forest and was caught off-guard recently when he learned that the process was moving forward so swiftly.

“I’m all for drilling,” Wood said. “But there are plenty of places for drilling without drilling in the forest.”

On behalf of environmental groups Wild South and Natural Resources Defense Council, the Southern Environmental Law Center was able to send a letter of protest before the April 19 deadline. The protest states the impact study used for the proposal of the leases from 2004 is outdated and new studies need to include the impact should fracking be used as a method of extraction.

“The Bureau of Land Management is proposing a massive intrusion into Alabama’s national forests without properly analyzing the potential impacts and without providing sufficient information to the public.  Some of the areas they propose leasing for oil and gas development are near some of the most popular destinations in the forests,” said Keith Johnston, managing attorney for the Birmingham office of the Southern Environmental Law Center.

John Stephens, a retired local geologist, at Monday’s meeting in Talladega was concerned about possible outcomes from fracking to the aquifers of the area.

“Fracking is a frightful thing for our communities,” he said. “Holes in (Mt.) Cheaha may come out in Sylacauga, or in Montgomery. Four to six million gallons of water, sand and chemicals will be used in each well, and those chemicals are going to eventually surface somewhere.

There has been no comment from the BLM regarding the sale of the leases and the details of the plan for the leases will not be made public until after the sale.