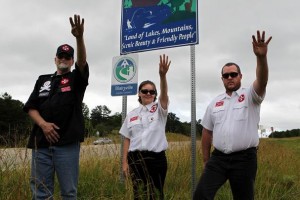 The International Keystone Knights of the KKK in Union County, GA had their application to the Georgia “Adopt a Mile” program denied. Keith Golden of the Georgia Department of transportation said in a letter to April Chambers, a member of the group, stating “The impact of erecting a sign naming an organization which has a long-rooted history of civil disturbance would cause a significant public concern.”

The application, submitted by the group on May 21st, proposed adopting a stretch of Highway 515 in the North Georgia Mountains. The county seat, Blairsville and a town nearby, Blue Ridge, are in popular resort areas in the state.

“It’s a terrorist organization. This is the right decision, and I commend the Department of Transportation for reaching a decision in due speed.”

The group has now turned to the American Civil Liberties Union for assistance.

“We are considering next steps and whether or not we will support the group,” said Debbie Seagraves, executive director for the ACLU of Georgia.

“We know this is unpopular,” she admits, but if her organization helps the International Keystone Knights of the KKK, it is not because it agrees with their beliefs. It will be based on legal precedent and a legal view of whether the KKK’s freedom of speech has been violated.

Harley Hanson, a member of the group, had this to say regarding litigation:

“If this does go into a litigation situation, the state really cannot afford to be wasting the money on something based on somebody else’s beliefs”

There have been other similar cases in Missouri, Delaware and California.

In 2008, the California Department of Transportation was forced to pay a $157,500 legal settlement relating to a lawsuit by the San Diego Minutemen, an anti-illegal immigration group. According to the Orange County Register, the group had adopted a piece of a highway near a Border Patrol checkpoint. Immigrant groups were angered, and state officials moved the Minutemen’s stretch of highway to another, more remote location. The group sued, arguing that its freedom of speech was violated.