My cousin was there visiting her BF’s sister a few months ago, and I asked her how it was. “It was weird for me, but you? Your head would have exploded.”

This starts out dismaying and then goes down from there. https://t.co/42PfjTDEfF

This anti-Trump arson and graffiti attack became a big cause celebre on the right in 2020 as proof of liberal violence. Now the feds say it was staged by the pro-Trump property owner as part of an insurance fraud scheme. https://t.co/OB06cJXLJR pic.twitter.com/0aDcevk09n

“They’re not gonna tell us ‘separation of church and state.’ We are the church! We run this state! .. The church runs the state of Georgia!”
—Kandiss Taylor, GOP candidate for Governor https://t.co/e5XIaVplVh

GA Gov candidate Kandiss Taylor says she will execute Sheriffs by firing squad if they don’t “do the will of the people. I don’t mind handcuffing them either .. The Constitution says when you commit treason, it’s death by firing squad. I didn’t write it – it’s in there.” pic.twitter.com/zZxWxEOctD

Whew! Watch This Angry Mom On TikTok Do The Covid Math | @crooksandliars https://t.co/Qa4q83r3Np

“John Bolton’s ouster makes the world safer,” according to a headline in The Nation, but the analysis that followed was unpersuasive. Yes, the loony chickenhawk is gone but not his boss, who has launched a misguided trade war against China, trashed the nuclear deal with Iran, threatened to nuke North Korea, and encouraged Boris Johnson to destabilize the EU and destroy what’s left of the United Kingdom. How is the world safer?

“Why do you read that crap?” said Swamp Rabbit, who was looking over my shoulder at the story. “Why don’t you feed the cats, or pull up them weeds over there by the tomato patch?”

I told him it’s important to follow the mainstream news analysts. They usually reach the wrong conclusions from the facts they gather, but careful readers can use the same facts to piece together conclusions that make more sense.

“I’m gonna piece together some lunch from that pork roll I swiped at the SuperFridge today,” Swamp Rabbit said. “Stop by my shack if you want a sandwich.”

I told him no thanks, I had some Triscuits, I was reading up on who might be chosen to replace Bolton. Politico said Trump was looking at more than a dozen “generally conservative” candidates, some of whom have ties to Bolton or Fox News or the George W. Bush administration. The pick will be a “yes person,” according to an insider quoted in the article.

But we already knew all that, didn’t we? We knew the new national security adviser is likely to be as despicable as Bolton (one of the liars who helped start the disastrous war in Iraq by falsely claiming Saddam had WMD) though possibly not as overtly kooky. That he or she will be an ass-kissing neocon who will obey all orders from Trump, no matter how stupid or vile.

In the end it won’t matter who’s chosen. No one Trump hires could possibly be any more impulsive or vindictive than he is, and he has the final say on policy. The world will be no more or less safe.

I should have waded over to Swamp Rabbit’s place for that sandwich.

Footnote: Imagine a just world in which government officials and their toadies are held responsible for their roles in debacles like Iraq and Afghanistan and Libya, where hundreds of thousands of people died for nothing and trillions of dollars were wasted. All the Boltons would have been banished years ago. A lot of them would be in jail.

My favorite Iran-contra story? When the report was finished, it was pretty damning of Reagan and his minions. One of them had a brilliant idea: “We’ll write an executive summary that completely contradicts the findings! Reporters are lazy, they’ll never read the whole thing.” They were right. The only reporter who read it was I.F. Stone, and no one who mattered listened to him.

In 1951, Douglas MacArthur, grand poobah of the armies and supreme egomaniac, announced his retirement by telling Congress, “Old soldiers never die, they just fade away.”

Nowadays, old soldiers and politicians and grifters and lawyers fight to their dying breath to not fade away. For example, Rudy Giuliani spent a decade and a half praising himself for having been mayor of New York in 2001 when those two planes took out the twin towers. As Joe Biden famously said, “…There’s only three things [Giuliani] mentions in a sentence — a noun and a verb and 9/11…”

But something new has come up. Giuliani, who more than ever looks and speaks like a rabid chipmunk, has elbowed his way back into the news by becoming the new legal rodent on Donald Trump’s sinking ship, where he’s quickly proven to be even dumber than long-time Trump lawyer Michael Cohen.

Stormy’s hired gun Michael Avenatti reacted to Giuliani’s remarks by telling CNN “I said it weeks ago, I’m going to say it again: Mr. Trump will not serve out his term. No way. No how. He will be forced to ultimately resign. This is a bombshell.”

A bombshell Trump set off by scraping the bottom of the barrel to find a lawyer who will delay the inevitable. Giuliani is doing the opposite. We should thank him for not fading away.

Now the senator came down here/Showing everyone his gun…
— Bob Dylan, “Stuck Inside of Mobile With the Memphis Blues Again”

This guy isn’t a senator. He’s Rep. Ralph Norman, and he is fast, fast on the draw. So fast that he made the news last week by whipping out a loaded handgun while having “coffee with constituents” at a restaurant in Rock Hill, SC.

“I don’t mind dying, but whoever shoots me better shoot well or I’m shooting back,” he later said.

“I don’t mind dying” is a line from Bo Diddley’s “Who Do You Love?” The narrator of the song is a boastful young rowdy looking to impress a girl named Arlene. Norman is a middle-aged Republican drone who’s also looking to impress Arlene, I guess.

The congressman told his coffee mates that he’d protect them with his gun. He vowed to not end up like Gabby Giffords, the ex-congresswoman who was shot in the head by some hombre while meeting with constituents in Arizona back in 2011.

But what if some bad guy had walked over to the table, picked up the gun, pointed it at Norman, and said “Who you gonna protect now, cowboy?”

One of them should have replied, “Anyone who would say something that stupid shouldn’t be allowed to have a gun, or hold public office.” 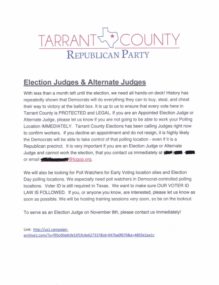 And Arizona, too, where they sent out similar mailers. Who could have guessed?

In response to the GOP email, J. Gerald Hebert, the director of the voting rights and redistricting project at the non-partisan, non-profit group, the Campaign Legal Center, sent a voter discrimination complaint to the Department of Justice on Friday calling for federal election monitors.

“Virtually every precinct in Tarrant County that is ‘Democrat-controlled’ is a majority-minority precinct,” Hebert’s complaint noted.

“The vote suppression efforts being made are cloaked in partisan rhetoric but are clearly targeted at Hispanic and African American voters in Tarrant County,” the letter said, while noting other “inflammatory” language in the email, like “..buy, steal, and cheat their way to victory…”

The Department of Justice confirmed to TPM it had received the complaint and was reviewing it, but would not comment further.

Hebert, in an email to TPM, called it a “a very serious matter,” while noting he also reached out to county officials about the GOP email.

“Intimidating voters for any reason violates federal law and we are prepared to take legal action, if necessary,” Hebert said. “The County officials running the election have primary responsibility to make sure the election is being run in conformity with all provisions of state and federal law.”

“It’s become the rallying cry of Democrats. Call racism at every turn, and what happens? The media will go run and write a story about it immediately,” O’Hare told TPM Wednesday.

The Tarrant County GOP’s email comes as Donald Trump has urged his supporters in stump speeches to act as vigilante poll watchers of sorts, prompting concerns that what will result is voter intimidation.