Ha, ha! Juanita Jean is one of my favorite Texas bloggers, and she’s got a great one this time. Remember when I wrote about the Tea Party “True The Vote” thugs the other day? It turns out that a local candidate backed by Cathy Engelbrecht, president of True The Vote, is registered and voting in two states. (Which is a felony in Texas.) So Engelbrecht is running around the country, screaming about Democratic voter fraud, and … well, isn’t it ironic? And predictable?

Today you get to know why I’ve been chatting about Cathy Engelbrecht and her True the Vote bullies. There’s been a story a’brewin’.

Cathy Engelbretch did not sniff out voter fraud when it was right under her nose smelling like a goat with a three day old catfish on its back. And here’s how I know that.

Bruce was also named Precinct Chairman of the Year last year by then GOP County Chairman and thug-about-town Rick Miller. Miller then recruited Fleming to run for county commissioner which seemed like a good idea at the time since Fleming is unemployed. Here’s Bruce’s website.So Ole Bruce is a dandy Republican who loves God and hates government
.

Recognizing that rights come from God, not government, and that it should be a servant, not a master, are foundational principles under attack today.

“Let me tell you about Bruce’s foundational principles. In 2006, 2008, and 2010, Bruce voted in person in Fort Bend County and by mail in Pennsylvania in the same general elections.”

According to his financial disclosure forms, Bruce Fleming also owns a house in Pennsylvania. (He homesteaded a house in Texas and a house in [Lower Makefield], Pennsylvania, but that illegality is a whole ‘nother story.) Bruce felt that owning houses in both states gave him the right to vote in the same elections in both states. That’s a third degree felony in Texas. 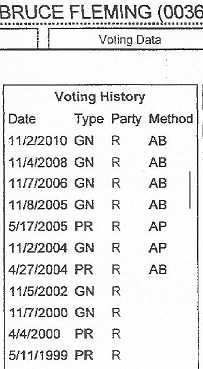 Yes, it’s the same Bruce Fleming with the same address and the same birth date. And, even though Bruce registered in Fort Bend in 2006, he’s still an eligible voter in Pennsylvania. We’re still checking to see if he’s asked for a ballot by mail in Pennsylvania this election. It appears that Bruce’s wife did the same thing in 2010.

So here sits True The Vote and the King Street Patriots out chasing imaginary voter fraud when real voter fraud is happening right here in their own front yard.

Ain’t that just the damnest thing you’ve ever seen?There’s more to this story and all kinds of ugly Republican twists and splatters but I thought you’d want to chew on the glorious irony of Cathy Engelbrecht’s own Republican county commissioner candidate being a felony chronic serial voter frauder.

But here’s the best part:

“To be honest with you, the tip was Mr. Fleming had bragged to Rick Miller that he had voted twice against Barack Obama,” said Don Bankston of the Texas State Democratic Party.

What do you suppose the odds are he didn’t brag to Cathy Engelbrecht?

2 thoughts on “True The Vote follies”