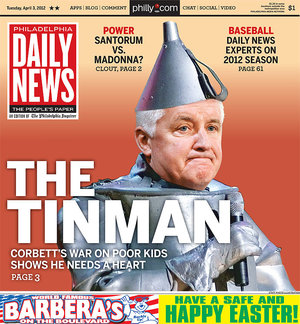 Did I mention that my neighbor, the one who was evicted, also has gall bladder disease and looked pretty yellow yesterday? Yes, making her get some imaginary job will really benefit society. Uh huh. God, I despise this punitive streak in people:

In announcing his plan, Corbett argued Medicaid is intended to cover only the most vulnerable, and Pennsylvania’s version is bloated with unneeded benefits.

He said he refuses to add more people to Medicaid, and he won’t use Obamacare funds to expand coverage unless his requested changes are allowed.

Corbett’s plan would apply to people earning up to 138 percent of the federal poverty level, which is $15,856 for a single person and $32,499 for a family of four. That’s the same group targeted by the Medicaid expansion called for in the Affordable Care Act, or Obamacare.

Corbett, who has been discussing Medicaid with Obama administration officials for months, expressed confidence his requests will be granted.

“If the goal is to get everybody affordable health care, this is Pennsylvania’s way of doing it,” he said.

Corbett made the announcement at Harrisburg Hospital while flanked by leaders of the Pennsylvania Medical Society and the Hospital & Healthsystem Assocation of Pennsylvania, whose CEO said he “applauds” Corbett’s plan.

Corbett officials later explained that cost sharing would be based on a sliding scale, with people at the high end paying monthly premiums of $25 per month for an individual and $35 for a family, and people at the low end paying nothing.

They also said enrollees could be penalized for things like taking a minor illness to the emergency room rather than a family doctor.

Secretary of Public Welfare Beverly Mackereth said those are the same kinds of cost sharing and rules faced by most people who have health insurance through their job.

“It’s about personal responsibility, it’s about making people think before they go to the doctor,” she said.

In other words, it’s about making people die because they can’t afford the co-pay. Freedom!