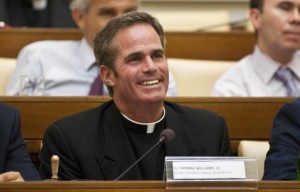 I don’t even know what to say. Best wishes?

VATICAN CITY — Thomas Williams, the onetime public face of the disgraced Legion of Christ religious order who left the priesthood after admitting he fathered a child, is getting married this weekend to the child’s mother, The Associated Press has learned. The bride is the daughter of former U.S. Ambassador to the Holy See Mary Ann Glendon, one of Pope Francis’ top advisers.

One thought on “Hey now”