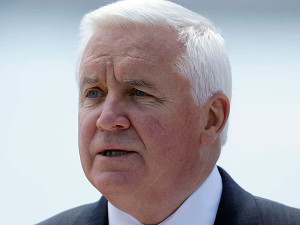 So the replacement for Medicaid is some jerryrigged system that will almost certainly benefit political cronies somewhere along the line, with the added benefit of making you work in order to get coverage? It’s way past time for this asshole to go. No wonder his numbers are in the toilet:

HARRISBURG The Corbett administration said Thursday it will submit a waiver to the federal government sometime after mid-January seeking to use billions of dollars in Medicaid funds to provide health insurance for hundreds of thousands of uninsured Pennsylvanians.

The details of the 100-page proposal are to be made public Friday when the plan is posted online.

In a briefing with reporters, state officials said they would submit the proposal following a series of hearings across the state but gave no projected timetable for its implementation.

“It is the next step to provide increased access to health care for the uninsured,” said Todd Shamash, Gov. Corbett’s deputy chief of staff. “We said we were going to do it, and now we are delivering on it.”

The news comes almost three months after Corbett, an opponent of the Affordable Care Act, announced his plan to make sweeping changes to the state’s Medicaid program and ensure coverage for about 500,000 people.

His proposal, similar to the one submitted by Arkansas that received federal approval, would use federal funds to cover costs through the private insurance exchange system created under the Affordable Care Act, instead of expanding Medicaid rolls.

Corbett’s “Healthy PA” plan has elements that could pose obstacles with the Obama administration: requirements that recipients pay a “modest” monthly premium and that working-age recipients be engaged in a job search in order to qualify.

Pennsylvania would be the first state to require able-bodied adults to participate in a job search or training program to receive Medicaid coverage.