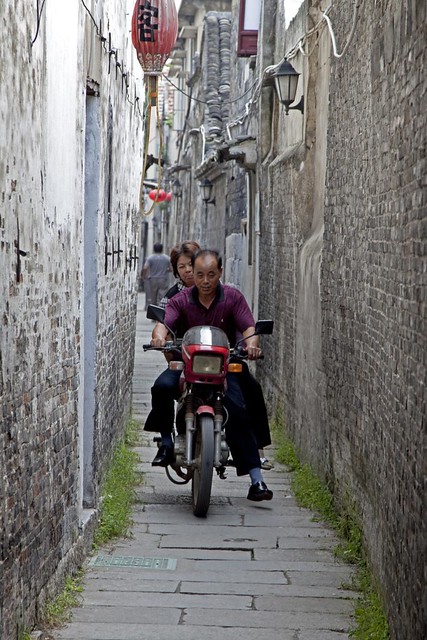 So I was driving through Fishtown Friday night, and there was a hipster guy on a motorcycle (girlfriend on the back) who seemed to be driving a little erratically. (It was the weekend of the local beer festival, and I was afraid he was drunk.) A couple of lights up, the guy pulled to the left, as if he were making a left turn. He wasn’t. He turned right in front of me (I was trying to get past him), and I just avoided hitting him.

Except the guy starts screaming at me in a purple-faced rage. I said, “Hey, you pulled to the left and then you made a right without using your turn signal!” Because I wanted him to know that he almost caused an accident.

“You’re a fucking liar! I used my turn signal! You’re an asshole!” His girlfriend chimed in, too. The two of then were yelling all kinds of nasty stuff, and then it escalated.

“I’m going to spit right in your face!” he said, and made noises like he was getting ready.

“That’s assault, and don’t think I won’t file charges,” I said. I closed my window and drove off. I was quite shaken.

First of all, I don’t freak out at people on the road. What’s the point? I assume most drivers are doing their best, and sometimes you’re in a blind spot or whatever, and shit happens. Or almost happens. If I’m in a near-miss, my primary emotion is relief that nothing happened.

But this made me feel really unsafe. I guess I should be happy this guy didn’t have a gun.

One thought on “Road rage”